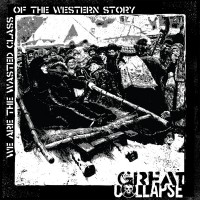 It's a sin that more noise hasn't been made about Great Collapse. You'd think a punk supergroup with vocals by Thomas Barnett (Strike Anywhere) backed by the likes of guitarist Chris Chasse (Rise Against), bassist Joe Saucedo (Set Your Goals) and drummer Kyle Profeta (Comeback Kid) would be talked up a bit more. In its own ferocity, Elemental does end up being the perfect remedy for those jonesing for more Strike Anywhere, but it doesn't end up being an exact carbon copy. Room's left for more crafting and more musical ingenuity. Did they exploit this space fully this time? Not really. But definitely, there's huge underlying potential.

The lineup pretty much speaks for itself. Not all the influences from each member come pouring in and it does seem that Barnett wants to sate those who've been waiting years for Strike Anywhere music. Opener "Blood, Bread & Roses" and its follow-up in "Civic Disassociation" are raw, explosive bangers that are indistinguishable from Barnett's old music as he's screaming full blast over ravaging melodies and heavy double kicking. It's this kind of fast-paced, skate-punk vibe which really works under his vocals and that's where "Quarantine" also shines. Maybe the other band mates will drop their creative ink, style and influences in the LP being currently written but right here, right now, this formula works.

The Set Your Goals aura does creep in at times -- upbeat and in harsh choruses. And it's from here the others make their presences felt a tad more. "Protection" is one of the six tracks that does incorporate more of a Rise Against element. "Breathe" riffs off Comeback Kid's hardcore essence with its frantic, high-octane speed gang-shouts. If these guys ever take a more hardcore-based approach, it'll definitely be sick to listen to. Their expression right now on these six tracks is pretty solid so taking more risks is something I can only see elevating their standing. As different styles of punk and hardcore are explored instrumentally and tweaks in Barnett's songwriting all clash, Great Collapse does manage to pay tribute to oldies like Pennywise, Rancid, Bad Religion and NOFX to name a few. The guitar-crazy "Sweet Paranoia" helps pay this homage and further lends credibility to a record that's packed with so much energy.

Yet amid all these nods to bands and music old, you can definitely tell how much scope lies in Great Collapse. The vision of the guys comprising this band is something I'm pretty comfortable with so no matter what they do next, I'm all ears.