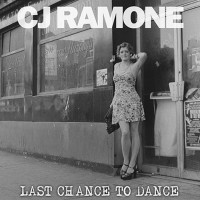 In 1989, the Ramones were at a crossroads. Bassist and founding member Dee Dee Ramone left the band shortly after the release of the bandâ€™s eleventh album, Brain Drain. Rather than pack it in after losing such a creative force, Johnny, Joey, and Marky recruited Chris Ward, a young kid fresh out of the Marine Corps. Rechristening him CJ Ramone, the band continued on for seven more years, with CJ playing a stronger role towards the end, singing four songs on the bands final studio album, Â¡Adios Amigos!. CJ dropped out of music for a time, focusing on family responsibilities, but resurfaced in 2012, releasing Reconquistan under the CJ Ramone moniker. Two years later marks his debut on Fat Wreck Chords, with Last Chance to Dance.

Released a month ago, the leadoff single, â€œUnderstand Me,â€ instantly reminds the listener of CJâ€™s previous, better-known band. As previously written, there are times that CJ â€œalmost sounds like Joey,â€ as he continues to do on â€œWonâ€™t Stop Swinging,â€ especially on the chorus. â€œOne More Chanceâ€ recalls '50s Pop, with Dan Root and Steve Soto (of Adolescents fame) providing their distinct guitar sounds, at times giving the album an old-school O.C. feel.

â€œCarry Me Awayâ€ slows the pace down a bit, but â€œâ€™Til the Endâ€ brings it back to that late '50s feel, and â€œLong Way to Goâ€ rips the lid off of CJ and his band. One of the albumâ€™s highlights, itâ€™s a barroom rocker with a scream-along chorus. From the high to the low, the longest song on Last Chance to Dance, â€œMr. Kalashnikov,â€ is also one of the weakest. Regardless of anyoneâ€™s feelings on the subject of guns and gun ownership, the song is a boring tribute to the creator of one of CJâ€™s favorite weapons. He recovers quickly on â€œPitstopâ€ (although it bears a suspicious similarity to â€œCarbona Not Glueâ€), but drops back down again on the follow-up, â€œGrunt.â€ Itâ€™s angrier and dirtier than the rest of the collection of songs on Last Chance to Dance, and feels out of place. In hindsight, it would have been a much better b-side to â€œUnderstand Me?â€ than the non-album â€œRise Aboveâ€ was.

â€œYou Own Meâ€ and â€œLast Chance to Danceâ€ close out the album, with a combined five minutes of head-bobbing, sugary sweet melodies. â€œLast Chance to Dance,â€ if you make to to the end, will stay in your head for days, CJ repeating the title over and over for the last minute of the song. â€œCluster Fuckâ€ puts an emphatic exclamation point on the 12-song collection, which times out exactly at the 30-minute mark.

CJ Ramoneâ€™s first release on Fat Wreck Chords is a more than admirable effort, and certainly worthy of the recognition that he name will rightfully attract to it. Many songs, particularly â€œYou Own Me,â€ â€œUnderstand Me,â€ â€œOne More Chanceâ€ and the title track would have sounded perfectly at home on a latter-era Ramones record, while others (â€œMr. Kalashnikov,â€ â€œGrunt,â€ and â€œCluster Fuckâ€) sound a bit out of place when placed against the others. But while itâ€™s easy to make all the Ramones comparisons, itâ€™s also unfair, as itâ€™s CJâ€™s record and ultimately should be judged on its own merit. In the end, Last Chance to Dance is an enjoyable spin, but nothing groundbreaking. A good rock â€˜n roll record for fans looking for a quick fix.