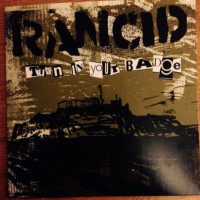 When modern punk legends Rancid released their new album â€¦Honor Is All We Know in 2014, they decided to throw in some bonus items for those who bothered to grab a physical copy through the long running web store Interpunk.com. In addition to the bonus track, â€œBreakdownâ€, which appears on the vinyl version of the release, my order also contained a CD of the album along with a limited run seven inch record called "Turn In Your Badge."

The A-side of the record is the title track â€œTurn In Your Badge.â€ Itâ€™s a return to a faster, heavier song format that would not have been out of place on Rancid 2000. Clocking in at a mere minute and 15 seconds, the song zips along at a frantic pace with great energy. Tim and Lars trade off on vocal duties. The bass line throughout the song is impressive and the distorted, squealing guitar solo at the middle mark is a highlight. I believe the song is strong enough to replace a good half-dozen of the ones that appear on the second half of â€¦Honor Is All We Know, so perhaps its presence was needed there more than on its own seven inch.

The B-side features â€œSomething To Believe In A World Gone Madâ€. The song is structured around the rumbling toms and bouncing bass riff that give it a low-end feel, but it never really reaches any sort of high that the listener might be expecting. It sounds like one big, long break down stretched out for nearly three minutes. The call-and-respond chorus of â€œOh yeahâ€¦ Oh noâ€¦ yeah, yeah, yeah, yeah, yeah!â€ isnâ€™t exactly the most thoughtful lyrical content for a band that features one of the most prolific songwriters in punk rock. But if the goal here was to place an oddball song on the flipside of a single, then it works within this context.

While the idea of putting songs on an additional item alongside an album may be confusing, Turn In Your Badge holds its own and is definitely worth hearing if youâ€™re still a Rancid fan these days. However, if youâ€™re simply just upset with everything the band has recorded since 1998 then skip it.