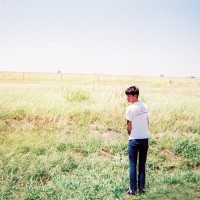 When bands follow up more-than-solid LPs with an epic split within the course of a year, I'd call that a big bonus. You'd think one win would be enough for each, right? Not with these bands. They're hungry. And that's where Whirr and Nothing strike hard again. Not only do their dual contributions feel like new material, but they feel like amazing offshoots from a 2014 that's been more than kind to them. Feels like a perfect growth in sound and nature running its course. It's music deserving of its own spotlight but still, there are more than enough remnants of the old songs to keep you attached to the stuff you loved from both ensembles.

These bands continue in a musical vein that allows both to showcase how different they are to each other but also, just how these dissimilar sounds collide to make brutally honest and genuinely moving music. Whirr's two tracks flow sweetly off Sway. This was one heck of a moody record, filled with emotive swings and broody soft-spoken lyrics, and all of these come full-circle here agin. But with a bit more pace. While the lyrics feel a bit dragged out on "Ease", it makes for good mood swings. It pans out as contemplative yet not as abstract as their past work. "Lean" on the other hand is more dream-oriented but does rough its musical narrative with a bit of oomph a la Balance and Composure or Title Fight. Sharp, indie guitars help to bolster the distorted and edgy dream-pop at hand. Another notable point is the one-word tracks which continue their trademark enigmatic style in almost everything they do music-wise. Pretty good snapshot of Whirr, indeed.

Then up rolls Nothing. After Guilty of Everything took abrasive shoe-gaze to the next level a few months ago, let me just say, you're in for another treat here. "Chloroform" starts off as a shocker with its intro coming off indie-punk before switching into melodic, emo waves. However, it doesn't settle there as it careens into heavy guitars. This structure repeats itself and the contrast from a breezy, lucid Alcest-like sound to such rough, loud guitarwork feels like a bucket of cold water thrown to wake you up. One you're enjoying. It gives them a neat edge of diversity while embedding in their past shoegaze/'90s emo trope. The latter's emphasised more on "July the Fourth" which is melodically intense yet a hard-rock effort. It's based on a '90s grunge foundation and feels grimy. In fact, it sounds similar to when fellow Run For Cover alumni such as Sainthood Reps and Basement got down, dirty and loud. Chilling, to say the least.

Both bands don't skip a beat here and it's four of their best. No doubt, these are most welcomed if you enjoyed their 2014 series of work. Kind of hypes you even more for what's next in store.