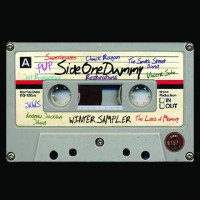 I think that it is fair to say that 2014 was a very good year for SideOneDummy. And now that theyâ€™ve signed other artists like Jeff Rosenstock who is coming out with a full-length in the not-so-distant future, it looks like 2015 could be just as good of a year for the label if not better.

Now that 2014 is drawing to a close and â€œend of the year list seasonâ€ will soon be upon us, SideOneDummy has released an eleven-track winter sampler of all the new music that the label has release this year. In my case, Iâ€™m huge fan of the material that PUP, Andrew Jackson Jihad, and Jeff Rosenstock put out. The label chose to put â€œReservoir,â€ the rockinâ€™ juggernaut of a song (and one of the best new songs of 2014 in my opinion), on this comp. From Andrew Jackson Jihadâ€™s Christmas Island, SideOne chose the uber-folky and acoustic-based song â€œTemple Grandin.â€ And they from the Fest edition EP, they chose to put the highly distorted, garage-punk tune â€œHey Allison!â€ on here as well.

For those of you who are not necessarily into those songs, SideOneDummy also chose to put The Smith Street Bandâ€™s powerful song â€œSurrenderâ€ on this comp as well as Chuck Raganâ€™s country-folk song â€œYou and I Alone,â€ Restorationsâ€™ gloomy track â€œSeparate Songs,â€ as well some other notable Side One Dummy bandsâ€™ tunes. Overall, this sampler shows just how dynamic this label has become.

The Brokedowns: Life Is A Breeze