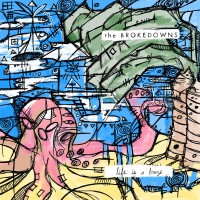 To describe The Brokedowns as just another Midwestern pop-punk band would be to sell the Elgin, Illinois four-piece extremely short. Yes, theyâ€™re from the Midwest, and yes, there are more than enough hooks and sing-along choruses to check all of the pop-punk boxes, but thereâ€™s so much more too, from impassioned shouts to clever, pointed lyrics, and itâ€™s all deftly assembled on Life Is A Breeze. The record shows a band that, after a period of evolution, has figured out a sound all its own, and is now making the most of it.

If youâ€™re familiar with the bandâ€™s past output, then youâ€™re already aware that after starting out with a heavier sound on early records, The Brokedowns infused much more melody, to great effect, on their previous full-length, 2010â€™s Species Bender, and on a number of subsequent split 7-inches. On Life Is A Breeze, the band sticks with that sound and seems quite comfortable doing so.

The record kicks off with â€œJoliet, the Maui of the Midwest,â€ which serves as a sort of a tourism jingle for the bandâ€™s home region. It lays an effective foundation before the record launches into a series of standout tracks. â€œThe Gospel of Mustafa,â€ â€œLife Is A Breeze,â€ â€œMurder Junkie/CPAâ€ and â€œEverything is Immoralâ€ are all as good, if not better, than anything on Species Bender, and â€œMurder Junkie/CPAâ€ specifically hearkens back to that record with its similarity to â€œLoyal Looper (Theme From Renegade),â€ which is no bad thing. Unfortunately, thereâ€™s little time to come up for air, as the next handful of tracks, starting with â€œBorn on the Bayou Too,â€ are just as strong. In fact, the quality stays high all the way through to the closer, â€œA Childâ€™s Guide to Black Metal.â€

As a whole, Life Is A Breeze is an extremely satisfying follow-up to Species Bender, taking everything that was great about that record and building on it. The one shame is that, coming so late in the year, Life Is A Breeze is likely to miss out on a spot on many year-end lists. Itâ€™s certainly an honor lost, though Iâ€™m not so sure The Brokedowns care about that sort of thing.