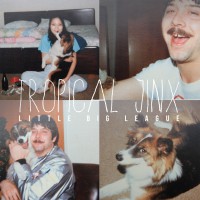 A big mark of success is repetition. Philadelphia's Little Big League got over the first hurdle, and quite well at that, with These Are Good People. The foursome, featuring former members of Strand of Oaks, Titus Andronicus, and Post Post, smartly navigated the indie-punk catacombs in 2013 to mix in a marvellous spread of emotive post-rock haze while trying to make a sound that they could call their own. Musical comparisons with the likes of Speedy Ortiz and more so, Hop Along, were inevitable but that couldn't take away from how promising their debut came off. I couldn't fault those comparisons either because to me, they really did ring similar to the latter. Fast forward to Tropical Jinx and what you end up with, is a band that builds on all that promise and shows how to branch out and shake all those comparisons. This record defines their sound as theirs and is one that no doubt establishes them as an indie-heavyweight as opposed to some juxtaposed name-drop. If you liked them before, you're gonna be madly in love with them now.

It's less about power-pop and jangly music this time around. Don't get me wrong. They didn't totally scrap these elements to their game. But LBL and especially Michelle Zauner (vocalist) show immense growth and in doing so, they come off more dynamic and highly flexible. This record's aggressive without being loud. Authoritative without being too demanding. A novel without being too musically preachy. All of these are helped along by Zauner's delivery on romance, loss and her overall take of vulnerability in life. She expounds with greater degrees of tension in her voice - more rough edged and this stretches miles in setting her apart from Frances Quinlan. And in setting them apart from Hop Along on the whole. Songs like "Sucker" and "Deer Head" counter a lot of what they placed on record last year as they come off melodically sharper yet quicker, brasher and more cynical. Zauner's jaded words really flip the script on her disposition of past which was more endearing and dare I say, naive. She's angrier and this ups her game.

As a more punk-adjacent album, you feel extensively absorbed into Tropical Jinx. You sense their music as antagonistic as opposed to passive which makes sense given that a few snide remarks were thrown the band's way (and undeservedly so) in the past. They still don't lose their catchy edge but it's how fearless they come off which really wins me over. This is them answering back critics and detractors. That's why everything's so serious on this sophomore effort. It's their statement to back the fuck off. Mid-album, you're thrown back to last year as you get brief moments of math-y lighthearted moments. Overall though, when weighing the album on the whole, these moments are fleeting and quite minimal. This is further felt when you find yourself swaying back almost immediately to a prominent '90s emo vibe in terms of the haunting "Property Line". And from here, you dive even further into solemn tracks like "Take It To A Weird Sad Place" - which pretty much explains itself.

Enveloped in a canopy of testy, resonating harmonies, you lose yourself. Deeply. This is LBL's most provocative, incisive, confident and self-assured music to date. I should have expected this given the last set of works I heard them craft off an Ovlov split. It didn't strike me then how much they'd geared down with so much more gravity in their sound. But it really foreshadowed what was to come, especially in terms of lyrical content. By the time this train of thought trails off and "In Air" closes off proceedings, the stark reality of the album sinks in. This is the next step in their evolution and Tropical Jinx is the exclamation mark that sees Little Big League stepping out of any shadows that may have been cast over them.