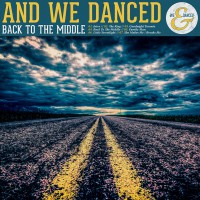 When I heard that members of Gratitude, The Jealous Sound, and Cadillac Blindside had formed a new band, my expectations were high. These bands in mind, itâ€™s hard to imagine that any debut EP could have met them. These expectations though were tempered a bit when I learned the new outfitâ€™s name: And We Danced. In the contemporary community, bands have made it increasingly difficult to take their monikers too seriously (e.g. Antarctigo Vespucci, Creepoid, Too Many Daves), which is a well-warranted phenomenon in a subculture that contains many adherents and bands that often take themselves too seriously. As a name, And We Danced, however, is dull and, even more so, cringe-inducing. Unfortunately, the music pairs up accordingly.

Zaq Zrust, one of Cadillac Blindsideâ€™s two guitarist/vocalists, fronts the new band, and, while his vocal approach in his former group conveyed a sense of raw emotion and urgency, paying homage to emo pioneers such as Rites of Spring, the delivery here is as generically saccharine as Sugarcult.

In recent years, many late 90s/early 2000s rockers have matured and established projects that continue to provide some affective yet thought-provoking material (e.g. Beach Slang, Great Apes, even Brendan Kelly and the Wandering Birds). And We Danced, on the other hand, remains stunted in a swirl of early-to-mid-2000s bands that sought to capitalize on the rise of Fall Out Boy and Simple Plan â€“ bands that are now obliviously irrelevant.

All of that said, the album doesnâ€™t begin quite so bad. The atmospheric opening â€œIntroâ€ sounds like a bridge that could have been located somewhere on The Jealous Soundâ€™s most recent release. On the second track (â€œThe Ringâ€), the sonic qualities change â€“ and all those head-scratchingly stale metaphors from 2001 pop-punk radio begin to show their skin. Over the verse, Zrust spouts â€œwhoa-whoa I stepped on a landmine/whoa-whoa is my face red?/the worst part is I still love her/Iâ€™m self-destructing while she takes cover.â€ Over the chorus, we get a few hints of rasp, reminding us that it really is one of those guys from Cadillac Blindside. By that point, though, itâ€™s too little, too late for anyone expecting anything more, or even equally as, complex as its membersâ€™ earlier projects. Of course, less complex is not always painful and trite, but when it regresses to conventions that most of us would prefer not to revisit, especially when most of us never visited them in the first place, it surely is: predictable four-chord patterns, annoying vocals, hopelessly dramatic lyrics.

This first full track sets the tone for the remainder of the album, the lyrical content of which focuses on romantic relations. And while romantic relations are a consistent feature of many listenersâ€™ lives, itâ€™s hard to appreciate such total inundation in the general punk genre in 2014. Itâ€™s actually startling how generic some of the lines on this album are. In â€œGoodnight Toronto,â€ Zrust pleads â€œIâ€™ll be the saint, Iâ€™ll be the sinner/Iâ€™ll be anything you like â€¦ You be the match, and Iâ€™ll be the fire/Weâ€™ll save the world from black and white.â€ You know, if you want to write songs about romantic relations, thatâ€™s fine with me, but you need to get much more imaginative than this.

Like the first track, the final trackâ€™s first twenty seconds show some promise, but the tone, once again, quickly changes, and weâ€™re met with a chorus that begins â€œIâ€™m in over my head/she makes me, breaks me.â€ Sadly, this release feels dishonest and comes across as a frantic attempt to cash in on a nearly evaporated, and ultimately forgettable, fad in sound. Itâ€™s incredible that at no point did any member step in and say â€œOk, weâ€™ve got some basics here with the lyrics, but letâ€™s rework a few things.â€