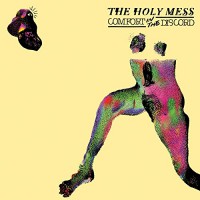 I think its fair to say that The Holy Messâ€™s last full length, Cande Ru Las Degas had a darker tone to it. But for their newest full length, Comfort in the Discord, they have definitely brought the tone of their songs back to a brighter sound while still keeping it pretty heavy.

Not only is it brighter, but also this albumâ€™s overall sound is bigger and bolder. You can hear how much the band has grown and improved since their last release on Discord.

One of the more noticeable improvements The Holy Mess have made on Comfort in the Discord is their musicianship, most notably on the song â€œSpencer Reid.â€ This is definitely one of the faster songs of the ten tracks on this album. Thereâ€™s great mixture of notes being played on the higher strings on the lead guitar part that contrasts really well with the bass line during the verses as well as a very tight chord progression.

And the third improvement the band made on this album is their lyrical content. The track â€œPositive Noiseâ€ is the prime example of this, where in the chorus they beg the question, â€œIf we play the right chords, theyâ€™ll make positive noise / Lifting up these spirits as we drain them.â€ These same two lines are sung at the end of â€œSpeak Uneasyâ€ as well.

Comfort in the Discord is a milestone for The Holy Mess. They have made more improvements on this album than just the ones listed. Even the production is noticeably better. The album as whole is filled to the brim will awesome melodic punk jams.

On another note, this is the last album where the band recorded with their four-piece lineup, as their other guitarist, Scott Engel, is no longer in the band. Obviously, the band isnâ€™t going to stop, but whether they add a new member or remain as a three-piece, who knows how their sound will be affected by the change on their next record? Regardless, I certainly will be looking forward to it, but in the meantime give Comfort in the Discord a shot.

You can check out this album here.