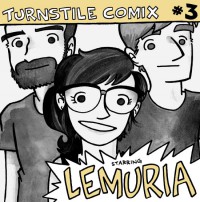 Lemuria has taken some novel approaches to releasing their music this year. First there was the surprise 7-inch bundle, a grab bag of rarities fans could pre-order. Then came the tour 7-inch, a record that could only be obtained by purchasing tickets for the bandâ€™s fall tour. Now comes the latest twist: Turnstile Comix #3, a comic book/7-inch split with artists Mitch Clem and Nation of Amanda. Previous installments for the Slow Death and World/Inferno Friendship Society were tops, and Lemuriaâ€™s issue is just as strong.

Clem has gotten more comfortable with long-form storytelling. Every issue of Turnstile Comix has been a series of vignettes, but this one flows perfectly as one continuous arc. While the art was was a little thrown together (by Clemâ€™s own admission, he straight up forgot about a character), the comic is still a hilarious look at Lemuriaâ€™s haphazard tour of Russia. Clem injects enough of himself into the book to provide context for what Lemuria means to him, and then sends the band off on a series of adventurous adventures. I donâ€™t know if the members are this surreal in reality, but I need them to be. Whether dodging Russian mobsters or petting an obscene number of dogs, the whole issue is packed with goofy charm and a rapid fire blast of jokes. This feels like a funny story shared between friends.

The songs are nifty too. The production feels a lot drier and less flashy than some of Lemuriaâ€™s last few records, but the hooks still hit the same. Sheena Ozzella sings about self-doubt humorously on â€œChristine Perfectâ€: â€œIâ€™m a Christie McVie / I feel the weight of her world / I find comfort in being second best.â€ The flip side, â€œFoggy Smoke,â€ is a lot less fun: â€œI wouldnâ€™t dip my toes in you.â€ Lemuria has always had a knack for weirdly specific put-downs. Digital bonus track â€œCourtesy Mercedesâ€ finishes off the collection, making for another satisfying release for both Lemuria and Turnstile Comix.