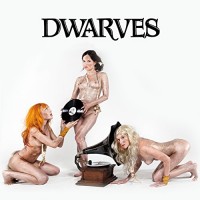 Rock gods the Dwarves have graciously bestowed the Gentleman Blag EP upon us in early 2015. For those who listened to and enjoyed The Dwarves Invented Rock â€˜N â€˜Roll (which you can stream here) you maybe familiar with two of the awesome songs on this 7-inch, â€œGentleman Blagâ€ and â€œKings of the World.â€ However, the Dwarves added two B-side songs to this EP that did not make it onto the full-length.

For those of you who havenâ€™t heard the track â€œGentleman Blag,â€ I think that it is safe to say that itâ€™s lead singer Blag Dahliaâ€™s (aka Blag Jesus) anthem. Itâ€™s a fast, melodic hardcore song that is sprinkled with hypnotic guitar fills. Overall it is in-your-face musically, but even more so lyrically. Donâ€™t just take my word for it; Blag himself says that the song â€œis about how big [his] cock is.â€ So clearly itâ€™s not exactly the most politically or socially conscious song, but it's funny, it's outrageous, it's sex-filled, and it's classic Dwarves!

But what makes this EP extra special is the two new tracks that were not on The Dwarves Invented Rock â€˜N â€˜Roll. â€œTrisexualâ€is a short (just over 30 seconds) and intense hardcore song. The track has plenty of Blagâ€™s signature high-pitched screams. It too, is sex-filled, but the lyrics attack religious views on sex, while at the same time encouraging sexual freedom and acceptance.

The other new song is the gem of the four on this 7-inch. Itâ€™s called â€œStuck in the Voidâ€ and though it is probably one of the best songs the Dwarves have written recently, it was a good move not to put it on The Dwarves Invented Rock â€˜N â€˜Roll. It just would not have fit in well with the other tracks because while songs like â€œTrailer Trashâ€ and â€œSluts of the USAâ€ were on the poppier and less serious side of the punk rock spectrum, â€œStuck in the Voidâ€ on the other hand has a much angrier and high-strung sound to it. It has Nick Oliveri screaming the lyrics at such a high pitch that you might wonder how his throat didnâ€™t bleed when recording his vocals. To contrast his screaming the backup singerâ€™s parts come off as almost chorus-like. And most notably, the lead guitarist plays these haunting high-note fills through out the song that add a ton of tension to it. There is also a very dark breakdown where the distorted bass takes over the song and the drummer plays this marching beat on top of it. Then Blag joins back in with these ghostly whispers that have some sort of weird echo effect on them.

Now inevitably there will be a few (or more) of you that will think or leave a comment about how the album art of this 7-inch is sexist because of the two naked women on it. Respectfully, I disagree with you. This really isnâ€™t anything new that the Dwarves put on their album covers (i.e. almost every release in their career as a band). When I first saw the cover of this 7-inch online I laughed because its outrageous, but I laughed mostly at the fact that Blag is in a tuxedo and a top hat. Whoever designed the album art for this should a get a raise or something. Well done! But when I got the physical copy in the mail today, I laughed twice as hard at the back cover because itâ€™s the same two naked women in pretty much the same pose, with Blag stark naked between them, still wearing the top hat. How sexist is it now that he is naked, too? Itâ€™s not and it wasnâ€™t to begin with. Itâ€™s just funny and the nudity is for shock value, which is a huge part of punk rock. If printing pictures of nude people is so objectionable why arenâ€™t there protests outside of the Playboy mansion or the Playgirl headquarters?

Listen, Iâ€™m not some wacky menâ€™s rights activist, Iâ€™m all for equality, but is it too much to ask to have a bit of sense of humor and to lighten up a bit? Whatâ€™s so wrong with the human body? Iâ€™m all for freedom of choice. Iâ€™m pro-choice in the classical sense of the phrase (and also when it comes to womenâ€™s reproductive rights in case you ask). Shouldnâ€™t people do what they want with their bodies (as long as its legal and the participants are consenting adults) regardless of whether they are male or female? Thatâ€™s what happened in this photo shoot for this cover and the rest of the Dwarvesâ€™ album covers.

I think Blag was exactly right when he was asked about the Dwarvesâ€™ lyrics and album art in this recent Noisey interview when he said, â€œI ascribe to any reasonable feminist concern. But, many so-called left wing or feminist folks are so PC that they are worse than conservatives at this point.â€ He also said, â€œRock and roll has become extremely PC and bullshit, just in the time that Iâ€™ve been involved in it. And Iâ€™ve always felt that it was PC and bullshit. Really most musicians censor themselves, they donâ€™t need any outside censor, because theyâ€™re just too afraidâ€ in this recent Punknews interview.

Especially after the recent events in France, the last thing I think anyone wants is more censorship regardless of whether it is government-imposed, self-imposed, or imposed through threat of violence or intimidation. I was once told that good art (in any medium) is art that sparks a reaction in people regardless of whether that reaction is positive or negative. I guess that means that the Dwarves have being making great art for a long time now.

Do women have legitimate equality concerns? Yes. But where is the line between being respectful and being so politically correct that you are considered boring, uptight and humorless? Thatâ€™s no fun. If someone wants to pose nude or model clothing for some kind of publication at their own will, do we support them in choosing what they want to do for a living? Or do we tell them that it isnâ€™t all right to do that and bar them from doing it because itâ€™s â€œdisrespectful?" Where is the line drawn? When will some people just take things a little more lightly? Yaâ€™ll need to listen to more Dwarves.