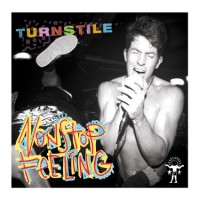 Since 2010, Turnstile have been reviving and infecting the hardcore community with their unique groovy metallic sound. The band is reminiscent of Warzone with their aggressive vocals that revives '90s New York hardcore while also remaining fresh in todayâ€™s scene. With a demo and two EPs, Turnstile continues to develop their sound on their debut full-length record, Nonstop Feeling. The album is a testimony to the bandâ€™s progress and shows that Turnstile has not only pushed the limits of hardcore, theyâ€™ve pushed the limits of their own sound as well.

The album opens up with â€˜Gravity,â€ a hard-hitting track that sets the literal groove for the rest of the record. The song is a natural progression from the bandâ€™s last EP, Step 2 Rhythm and shows the listener that the group is picking up right where they left off and running even further with it.

Lead singer, Brandon Yates has a flow like Anthony Kiedis (Red Hot Chili Peppers) on songs like â€œCanâ€™t Deny It â€œ and â€œBad Wave,â€ with aggressive vocals that remind me of Zack De La Rocha (Rage Against The Machine). Yates also plays drums for Trapped Under Ice and truly shines as a drummer turned vocalist. By using his unique rhythm, Yates create vocal parts that stand out alone while staying in sync with the rest of the band. Yates also shows off his singing skills on this record, an attribute that meshes very well with his aggressive vocal style, particularly on tracks like "Canâ€™t Deny It."

The band has also blended in some more diversified parts on this record different from their previous releases, showing that they are more than just metallic grooves. "â€˜Blue By You" isnâ€™t so much a departure as an expansion of the bandâ€™s sound. Although short, the song sounds like washed up surf rock that might make listeners scratch their heads but ultimately adds a subtle depth to the album without slowing it down or becoming boring.

"Stress" is an open-ended closing track. As heavy as it is beautiful, the song concludes the record but ultimately gives the listener a sense of completion. Concluding with one of the longest songs on the record, "Stress" certainly brings a conclusiveness that Turnstile have surpassed their expectations. At the same time, the song leaves the band ending a near-perfect debut album with more promises to offer fans on future releases.

Turnstile have kicked off with one of the yearâ€™s first and possibly finest hardcore album and will hopefully set the trend for the rest of the year. Whether youâ€™re a fan of the band's earlier releases or a new listener, Turnstile has an aggressive sound invigorating enough to keep you wanting more.

Gates: You Are All You Have Left To Fear