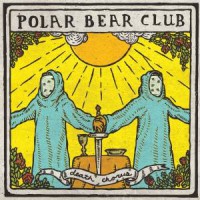 Well over a year after this record was released, much of the conversation around this band continues to revolve around one subject: Jimmy Stadtâ€™s voice. Polar Bear Clubâ€™s fan base was heavily grounded in Jimmyâ€™s gruffly melodic roar. He toed the line between singing and screaming, and it made Polar Bear Clubâ€™s first records emotive powerhouses. His very public vocal deterioration and the subsequent sleeker vocal approach on Death Chorus resulted in a seemingly big shift in sound: some were supportive, but for many, this marked the end of the bandâ€™s appeal. Iâ€™ve got friends who maintain they canâ€™t even give this record a chance for that reason alone.

I will say this: yes, the vocal change is jarring. Even more so if you listen to Death Chorus immediately after any earlier release. But the change does not diminish the merit of Polar Bear Clubâ€™s greatest strength: the songwriting duo of Stadt and guitarist Chris Browne. Browneâ€™s distinctive, but melodic and accessible guitar work has always seemed to be built perfectly for the catchy hooks and heartfelt lyricism of Stadt. On this record, this relationship is just as strong.

The band continues its formula of pop-punk fueled post-hardcore, with an even greater emphasis on catchy lead guitar lines and big choruses. â€œWhen We Were College Kidsâ€ is a nostalgic rocker with plenty of â€œwhoa-ohsâ€ to boot. The up-tempo â€œFor Showâ€ is lyrically ambiguous, but the emotional resonance remains. The same can be said for â€œChicago Springâ€, â€œGraph Paper Glory Daysâ€, and â€œTwang (Blister To Burn)â€, all impassioned and heavy, despite Stadtâ€™s cleaner singing approach.

â€œSiouxsie Jeanâ€ is the only real stinker of the album. Itâ€™s a sincere ballad, but it lacks the goofy self-awareness of the bandâ€™s previous soft tracks like â€œDrifting Thingâ€. It ends up a little too schmaltzy and loses some of the albumâ€™s momentum. The albumâ€™s two singles, â€œBlood Balloonâ€ and â€œWLWYCDâ€, arenâ€™t its strongest either, replacing their unique sound with an increase in blander pop-punk elements. Nonetheless, the choruses of both are still astoundingly huge and earworm catchy, and the lyrics are full of Stadtâ€™s cheeky earnestness.

This is certainly not Polar Bear Clubâ€™s best effort (Iâ€™d personally give that distinction to Clash Battle Guilt Pride). Itâ€™s not the travesty that some have made it out to be, either. Itâ€™s a solid poppy post-hardcore album, full of plenty of sing-alongs that rival much of the bandâ€™s previous work. Ultimately, it signals a shift, but not a loss, in Polar Bear Clubâ€™s legacy.