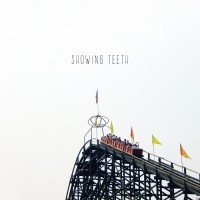 If you're a fan of Bob Barnett like me, then you're waiting for the next Captain, We're Sinking album. In the meantime, Barnett's passing the days by dropping some old demos (hopefully writing as well) recorded in 2010/11 as part of the writing process from their last release The Future Is Cancelled. With some recently mixed tunes dropped in as well, Kalufus is the avenue he chose to spill these beans. FYI: Kalufus is the lead character in Barnett's musical and if that's what it takes to get me more of his music, then count me in. Showing Teeth is a neat behind-the-scenes for a record that to this day totally slays!!!

The tracks are rough and raw, as expected. They offer great insight into The Future Is Cancelled as they're dark in nature and it's in these murky themes, Barnett shines most. "Lake" is the only track though off this album that made it into the 2013 release. Compared to the post-hardcore beauty of the produced track, this demo is pretty solid. Different lyrics, a heavier bass-line but it's still more or less the same. The rhythm's there as well as the head-banging feel. Ben from Tigers Jaw also chimes in on drums with the self-titled banger setting the stage earlier on. Melodic punk done right.

Even the catchier and poppier "Jones" adds much-loved context to the record as it brings a simple, picky and beautiful guitar-vibe out. Emo and dramatic. Great change of pace and a neat contrast. Mathy and intricate - which is the ideal foil for the '90s Seattle-esque grungy tunes like "The Scar Above My Right Eye " - another song Ben drummed on. It's a bit wordy at first but barrels into one epic finale. By the time, "Happy" rolls around, if you're new to Barnett, you're probably already scouring for his band's music because the loud-to-quiet explosions that drape this track, and most of the record, are exactly the tonic you've been looking for. Lovely little gem and a treat! This peek behind the curtain will do just fine sating my hunger for more jams from Barnett's group.