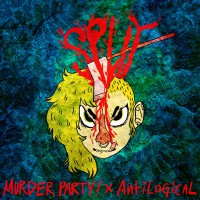 This EP features two bands that have been really active in the Grand Rapids scene for the last couple of years. Side A is Murder Party!, who play a twisted brand of horror punk with wry lyrics and a strong 50's influence. Each band contributes two songs, but Murder Party! sort of cheats. Both of their songs are really two songs, but it's cool, they're still only about three minutes long total. The two parts of "Black Lenny/Trigger Happy" flow together seamlessly. It's a memorable tale of a misanthropic man that owes to the traditional country storytelling style. "Backstabbers Club/Dead to Me" starts off as a doo-wop song, while the later portion is upbeat ska. The story of betrayal ends in a flurry of hand claps and dog barks. It's somewhere between the Misfits and Johnny Cash. It's good stuff, even if it continues the dubious trend of punctuation in band names.

Antilogical is on Side B, and musically they're much more straight ahead punk. What stands out about this band is the singer's relatively unusual voice. He sounds like the bastard child of the Dead Kennedys' Jello Biafra and the B52's Fred Schneider, or maybe The Tubes' Fee Waybill. None of these are a perfect match, but it might give you some idea. It definitely cuts through the mix. "Let Her Know" and "Hanging Tree" are both solid songs, that like Murder Party! show a healthy sense of humor, or at least irony. These bands make for a good match on this split, as fans of one band would probably enjoy the other. (If they're not already fans of both.) At four songs in twelve minutes, this just gives you a little taste of Murder Party! and Antilogical. Like any good EP, it leaves you wanting more. These are two bands to keep your eye on.