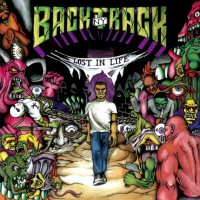 Backtrack are not an anomaly. They are not a band alone in their sound or genre. And they certainly are not of the underground avant-garde. But thatâ€™s not meant to detract anything from the boys in Backtrack. In fact, what they arenâ€™t is more a compliment and affirmation of what they are: one of the best hardcore bands around. And Lost in Life is a testament to that.

Those of you who picked up Darker Half -- the bandâ€™s first LP on Reaper Records -- are thusly familiar with the bandâ€™s thrashy hardcore stylings. What Lost in Life does is essentially twofold: it at once picks up right where Darker Half left off while also showcasing a logical and tenable progression musically. There is no stark departure in either sound or lyrical content, or packaging artwork for that matter. Lost in Life merely packs 12 antagonistic hardcore songs into just about thirty minutes of playing time.

The opening track, â€œTheir Rules,â€ sets the pace for a record that finds Backtrack honing a hybrid sound of thrash-laden hardcore music largely culled in the late-eighties New York hardcore underground and revived in the early millennium, not-so-coincidentally by earlier Bridge 9 releases. However, the sixth track, â€œTortured,â€ reveals the aforementioned musical progression with a mature attention to staccato guitar riffs coupled against a sharply played bass intro. Similarly, "Still Searching" reinforces a sense of growth and progression making use of those staccato riffs and well-layered guitar tracks, as vocalist James Vitalo carries the song throughout with smart vocal arrangements. Again, Backtrack does not aim to overstep their hardcore stylings here; rather, they simply seem to be polishing a sound that they began cultivating on their previous LP.

The recordâ€™s strongest track, â€œWash Away,â€ suggests a brevity of vocal patterns that is present throughout the entire LP. Vitalo dispenses with the need to oversaturate the bandâ€™s songs with too many vocal lines and wordiness, opting for a sensible pattern that makes for more memorable choruses and, of course, better sing-alongs.

Lost in Life is not a young bandâ€™s experimentation with new sounds or desire to expand their audience necessarily. Rather, it is Backtrackâ€™s offering of what makes them who they are: smart, ambitious, angry and knowledgeable hardcore kids. Simply put, their sophomore LP is a great achievement for its ability to showcase a hardcore sound that weâ€™ve all heard before without at all sounding rehashed or imitative. And thatâ€™s no easy task these days.