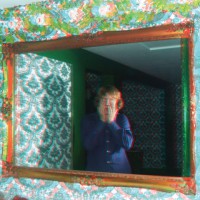 Mr. Face, the new EP from the hyper-prolific Ty Segall, boasts itself as "the world's first playable pair of 3D glasses." Somewhere, I have to imagine Jack â€œVinyl Willy Wonkaâ€ White pounds his fist on a table and goes back to the drawing board. Itâ€™s a silly, but fun gimmick. So while youâ€™ll probably only press the red and blue wax to your face once or twice to look at the cover, the real draw here is clearly four new songs from one of the most exciting songwriters working today.

Not that we had to wait very long for them of course. Just last summer, Segall released his excellent double LP Manipulator followed by a singles collection in the fall. Luckily, the winning streak continues here. The title track of Mr. Face leads things off with some acoustic riffing that wouldn't sound out of place on Led Zeppelin III or maybe Rubber Soul before things get gloriously fuzzed out in the second half. It becomes pretty clear right off the bat that this is a decidedly more lo-fi sound than the massive Ziggy Stardust-era Mick Ronson guitars of Manipulator. If anything, itâ€™s more reminiscent of Segallâ€™s early work on Melted or Goodbye Bread. â€œMr. Faceâ€ is a great start, and the following two tracks, â€œCircleâ€ and â€œDrug Mugger,â€ wisely donâ€™t stray too far from itâ€™s formula. The tempo only slows just a bit on the dreamy and jangly closer â€œThe Pictureâ€ as things wrap up in less than 15 minutes.

If Mr. Face turned out to be a bust, I wouldn't lose sleep over it since I know Segall would probably return in a few months with a new set of songs that sound fresh and completely different. However, while maybe not his best work, Mr. Face is still a wonderful quick listen in a cool package that will tide fans over until the (hopefully) imminent next LP.