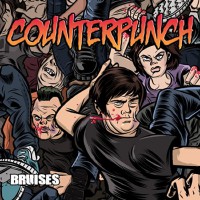 Are you tired of 90s style epi/fat skate punk? Good cause neither am I! Chicago's own Counterpunch is back with a new full length for 2014! Bruises sounds like it was made in the mid nineties in California while skateboarding your new Santa Cruz deck. Featuring members of We Are the Union and Break the Silence, the band turns in a solid effort.

The album opens up with "Guardrails" which is a perfect way to start this fast paced album, and sets the tone for how the rest of the album will sound. It's fast paced punk. There's a nice solo lead into the first verse. The chorus driven song will snag you in instantly. The title track is by far the catchiest of them all while it's not as fast as its opener still gets you bobbing your head along with its power chord breakdowns.

This album sits in between Pulley's Esteem Driven Engine, Lagwagon's Hoss, The Swellers "My Everest" and that's quite alright with me. Counterpunch knocked it out of the park with this one and truly brings me back to a better time for music and skateboarding.