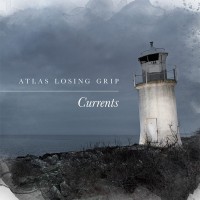 Rodrigo Alfaro was the main reason I got into Atlas Losing Grip. His vocal strength's the driving force behind the band and fits the amazing musicians this Swedish group boasts. I hope the transition is smooth for new vocalist Niklas Olsson, and from the little I've heard so far, well, it's very optimistic. But if it's one thing Currents does is re-emphasize that this closing ceremony, this curtain call for Alfaro is more than a farewell. It's their mission statement done in the most majestic manner and no doubt a huge contender for the best record they've ever done. It feels like the lead left it all out on the table for us to enjoy!

Alfaro's delivery and style factor in so much and are worth their weight in gold when you sit and ingest their sweet take on melodic punk. The songwriting's so personal and moving and definitely, with his departure, there'll be tall shoes to fill. As expected, the album comprises of speedy riffs, steady thumping bass lines and quicker sections layered over barrages of heavy double-kicking. For fans of A Wilhelm Scream, there are quite a few similarities. This is highly apparent on "Nemesis" and the mid-tempo frenzy called "Sinking Ships." Hearing them blend punk and various subtle metal influences (thrash and power) in shows their range and chalks up why they've had their cult following during their ten years of powerful melodies. I can't wait to fully hear Olsson reshape these songs in his image and expand into new territory. Exciting times ahead!

Listened to some Propagandhi before I sat with this album. Then before I knew it, Currents was in my deck for two straight weeks. Some tracks are hit and miss, but most feel just right. Gothenburg comes to life so seamlessly when tracks like "Through The Distance" and "Downwind" unwind. It's another session of dark, melancholy stories written over frantic, fluid and energetic melodies. The album, in its sense of urgency, tips over as one made for glorious moshing. It encompasses everything that they've done right. And while yes, it's a finale, it's also a new beginning -- and a great jumping on point for folks interested in their newest chapter.

The Ghost Inside: Dear Youth