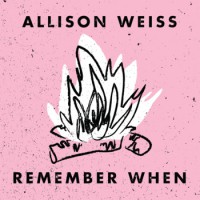 This might be a bit controversial for a Punknews review, but here goes nothing: I like Allison Weiss.

About a month ago I stumbled across her Nervous Energies session and fell for the acoustic guitar accompanied by the sounds of traffic and the crackle of her voice as she struggled to keep her passion within the confines of melody. Instantly, I started collecting back catalog offerings in search of more of that passion. It was with this high expectation I put her Remember When EP on my turntable.

In the first moments of the title track, I could tell there is something different about Weiss in the studio vs. Weiss in a field. These are big, carefully constructed pop songs, not the gritty performances of a passionate singer in the moment. The soaring, overdubbed choruses of voices during the chorus are blatantly radio-friendly. The vocals sound too polished and are compressed hard, leaving them lurking deep in the mix. I wanted the passion I heard to ring out loudest on these recordings, but it seems Weiss gets shy in the studio and the tracks that come out leave a lot of their heart on the studio floor.

Yet, underlying this studio polish are the hints of what I love about her music in the first place. At the end of "Giving Up", the vocal effects are finally stripped away for an effectively melodramatic refrain of "I'm giving up". The last 30 seconds of the last track on the EP, "Take You Back" see her finally stretch those vocal constraints and we feel just a bit of something, but is it too little, too late? In order to get to this final peak, you have to set aside your bewilderment that the last track is really a country song that just came out of nowhere.

In fact, the last two songs on the EP seem tacked on. There's the country "Giving Up" and then a tune that many otherwise self-respecting punx seem to love for some reason: "Call Your Girlfriend". Yes, a Robyn cover. If you're expecting the weird Robyn vocal affectations or a damn electronic dance party vibe that doesn't even make sense with the lyrics, you'll be let down. This cover is the emo version of the pop sensation complete with Texas is the Reason-style guitar arpeggios. The emo is further emphasized by Weiss' delivery of the lines, chopping them off at the end like she's embarrassed of the content and then swelling up during the chorus as a couple copies over her voice back her up. It's one of those ideas that sounds good on paper, but in practice falls a little flat.

I really wanted to like this record. However, like most of my favorite bands, Allison Weiss is better live than in the studio. So, before I am informed that they won't let me write another review, let me modify my opening statement: I like Allison Weiss live.