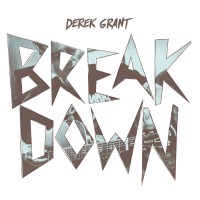 Drummers going off to lead a band is always a chancey venture, and this is coming from a guy who has done exactly that. Iâ€™m all for it, but as a fan of their previous/main band you never know what youâ€™re going to get. Unless they were already a primary songwriter in that band, their drumming style doesnâ€™t hint much at what their new project may sound like, whatever instrument they will now be playing. It has been done to much success by a handful of people, Phil Collins (he was a lead singer already though) and Dave Grohl come to mind, and to a lesser degree of quality, Ringo Starr (no disrespect). Here we have Derek Grant, and though he joined during the widely-agreed-upon decline of Alkaline Trio, he is the most skilled and creative drummer the band has had behind the kit.

You might find it odd that none of the drum parts on Breakdown are complex by any stretch. But having gone through this rhythm-section-to-frontman transition myself, youâ€™ll find that good drummers write their parts to fit the song and would never overplay. His drumming in Alkaline Trio fits their zippy, aggressive pop punk style, but here we have a lot of chill songs and some Americana, so the drumming takes it back quite a few notches. Youâ€™ll even find him playing with brushes.

So how are the songs? For starters, there is a huge sonic spectrum covered here from a guy who consciously made an album far from what his day job cranks out. This will set up a lot of Trio fans for a surprise and possible disappointment, but I find it admirable. The acoustic-based opener â€œHoliday Breakdownâ€ sounds downright Tom Petty. â€œLucyâ€ is practically an Elvis Costello homage, starting with rim clicks and palm muting and opening up into persistent, overdriven chords in the chorus, a memorable melody and a nice solo in the bridge.

On the downside, Grantâ€™s lyrics leave something to be desired. â€œWaiting for the End of the Worldâ€ is a bit trite, and the premise, the titular chorus line, is way overdone throughout pop music history. This is a breakup record documenting his divorce and resulting depression, and those records can go one of two ways, either awesomely or sounding downright awkward. His lyrics present, for the most part, a genuinely hurt guy, finding faults in the relationship with both parties as guilty. There is a lot of self-examination, which songwriting is great for, but singing â€I should take a good long look at my lifeâ€ (â€œGood Long Lookâ€) is a bit nail-on-the-head.

And his voice bugs me some of the time. Not to knock a guyâ€™s natural singing voice, but Iâ€™m not quite sure itâ€™s all natural. â€œGood Long Lookâ€ is sung is such a weird tone, and the sustained â€œmy liiifeâ€ grates, and the pitch is often shaky and flat. In the morose â€œGot a Feeling,â€ Grant whisper-sings the entire thing, and Iâ€™m not a fan of singers who change their voice for different songs, at least to this degree. Itâ€™s one thing to ratchet the emotion up or down, thatâ€™s different. But in this case he was like, â€œIâ€™ll do my best Elliott Smith impression on this one!â€ On â€œWaiting for the End of the Worldâ€ he takes on a Springsteen style loose, sneering croon.

â€œYou Donâ€™t Knowâ€ is a great cut, the most â€œhillybillyâ€ song, in a good way. Itâ€™s a goddamn hoedown that transitions to again sound like Tom Petty in the chorus.Then the record is over. 23 minutes? What is this, Joyce Manor? Most people around here, punk fans, would disagree with me, but this is an EP. In my eyes, an LP must be either A.) 10 tracks or B.) a half hour long. This is neither.

Ok, so Iâ€™ve railed on the record a bunch up there and I apologize. This thing ainâ€™t all bad. Itâ€™s a relaxing listen full of many genre experiments. Previously released single â€œLove is a Bad Dreamâ€ with its ambient piano lines and lap steel is a solid track. There are a lot of solid tracks. But there arenâ€™t any tracks that blew me away, or stuck in my head after the short album was over. I applaud Grant for going out on his own and can relate to a guy creating music completely on his own, playing any instrument he can knock out some notes on. A creative and likely personally satisfying venture, Breakdown will not blow minds, but will be a nice listen for Alkaline Trio fans, Americana fans and punk fans who can get down to classic rock.