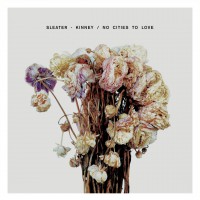 Itâ€™s been ten years since the last Sleater-Kinney release (2005â€™s The Woods) and nine years since their unexpected hiatus was announced. There was no public blowup nor stints in rehab, just three musicians going on their own paths after over a decade together. When their reunion was announced late last year, it was met with great enthusiasm if not slight trepidation. After all, ten years is a long time, and while the three ladies of S-K have stayed active musically (The Corin Tucker Band, Stephen Malkmus & The Jicks, Wild Flag), the band as an entity has a certain legacy to live up to, somewhat magnified by their time away. Not to worry, though, No Cities to Love lives up to it.

Itâ€™s like time never stopped once the album kicks off with â€œPrice Tagâ€ and moves into â€œFangless.â€ Corin Tucker and Carrie Brownsteinâ€™s guitars still intertwine with each other at times, while seemingly attack at others. Janet Weissâ€™ drums are strong and the album is positively explosive from the start. Tuckerâ€™s voice wails with a familiar fury on â€œSurface Envy,â€ with Brownstein joining in on the chorus, shouting â€œWe win/We lose/Only together â€˜till we break the rulesâ€ and bringing forth the albumâ€™s first true headbanging moment.

A more subdued groove highlights â€œNo Cities to Love,â€ with Tuckerâ€™s guitar providing the bassline that Brownsteinâ€™s guitar builds a steady riff over, finally culminating into a loud, busting chorus where they harmonize â€œitâ€™s not the cities itâ€™s the weather we love.â€ Those same harmonies highlight the choruses of â€œNo Anthemsâ€ and â€œA New Wave,â€ the latter song taking the title to heart, sounds coming together like the ocean crashing onto the beach, then receding back into calm.

â€œWeâ€™re sick with worry/These nervous daysâ€ Tucker and Brownstein sing in the chorus of â€œBury Our Friends.â€ The song, an example of flawless interplay between the two vocalist/guitarists with a pounding, primal beat by Weiss, is the albumâ€™s standout track and will be considered as highly as any other S-K classic in the bandâ€™s catalog. â€œFade,â€ the albumâ€™s closer, is the slowest of the new songs, rising up the middle both in tempo and volume, before fading out quickly, almost abruptly.

Simply put, Sleater-Kinney have not only returned with a worthy successor to their previous work, they have put out what is arguably the best album of their career. After a decade hiatus, No Cities to Love is a jagged, groove-laden and loud return to form for the trio. 2015, the bar has been set.