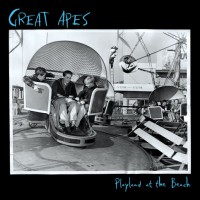 Great Apesâ€™ latest EP, Playland at the Beach, is many things at once: a love letter to the history and culture of San Francisco; a sermon against the myriad changes threatening said history and culture of the City by the Bay; five songs of hard-edged yet melodic punk rock with more than a little Schwarzenbach blood coursing through its veins; and another hit from frontman Brian Moss, Bay Area punk rock fixture known for such bands as the Wunder Years and Ole Hole. On Playland at the Beach, their latest release on Asian Man Records, Great Apes have developed into the band they promised to be with their debut full-length Threads, and in the process have released one of the most enjoyable and lyrically interesting EPs of 2014.

Thematically, these five songs cover San Franciscoâ€™s landscape both geographically and historically. While this may sound alienating to those unfamiliar with San Francisco, the songs tap into universal themes that prove anything but disaffecting. Topics range from the murder of Harvey Milk, the first openly gay political figure in American history, to the permutations of neighborhoods such as Telegraph Hill and the Mission District in an age of gentrification amid growing poverty. San Francisco serves as microcosm for the tenuous balance between rich and poor, old and new, tradition and an unwritten future.

Descended sonically from such bands as Jawbreaker and J Church, the Apes walk the walk when it comes to honoring the Bay Area that came before them. â€œRough in the Diamondâ€ serves as opener, and begins the proceedings with a bang and a holler. â€œMilk: It Does a City Goodâ€ is an atmospheric, angular jam recounting the life, death and legacy of Harvey Milk. Closing the EP is â€œWhitneyâ€™s Playland at the Beach,â€ an energetic recounting of â€œdecay at the cityâ€™s edge,â€ bursting into a melodic chorus that ties Playland at the Beachâ€™s concept together satisfyingly.

Great Apes have focused their sound, and their penchant for high-concept songwriting, into a fantastic EP that should serve to cement their own little spot in the annals of San Francisco punk rock history.

The Fuck Off and Dies!: Young Punks/Old Drunks [EP]