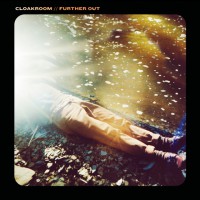 Cloakroom's haunting dynamic was the main reason I got into their 2013 EP. Infinity was emo without being too emo. Shoegaze without being too shoegaze. Dour, depressing and cathartic without being...well, you catch my drift. That album left a sonic imprint that had me spinning it for months on end due to the singular and otherworldly sound they possess. Further Out continues in this same vein and definitely adds a whole new dimension to Run For Cover's stable. Heavy, charismatic and a batch of tunes that defy categorization at times.

There's a cinematic feel to most of the album and this can be chalked up to the non-complex instrumentation which careens from slow-tempos to soaring, breathtakingly heavier sections. The primary comparison would be to Mogwai but they do well to differentiate themselves and not get too carried away by their influences. "Paperweight" opens the album and as a scuzzy, distressed balance of emo and shoegaze, it's one of the tracks you'd point someone to if they asked how best Cloakroom could be summarized. Muddled vocals fit around the instruments in a spacious manner and it's in this capacity, you truly appreciate the beautiful mess spilling out.

They wear a bit of Title Fight on their sleeves as well with the distorted and brawny "Moon Funeral". Space-rock at times yet the ideal vehicle for introspective post-hardcore. This trend repeats itself in "Lossed Over" but there's a more melodic grunge feel at hand. Atmospherically twinkly...yet dirty and rough. One complaint though which does stand out is that a few of the songs are too long and gives way to Further Out feeling a tad front-loaded. By the time "Deep Sea Station" closes off proceedings though, you're swimming back in the depressive nature of Cloakroom that kicked things off. Overall, it's a solid record that definitely feels like the right step in their evolution.

Headstones: One In The Chamber Music