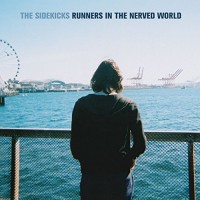 Change appears to be the only constant in the world of the Sidekicks. The Ohio group have never shied away from taking risks and as such their artistic evolution has been absolute joy to follow. The uber-melodic Sam EP was a massive step up from their more traditionally punk rock debut full-length So Long Soggy Dog. Weight of Air was a significant evolution from there, simultaneously establishing them as one of the most exciting acts in punk scene as well as shedding the limitations of that scene and truly carving out their own sound. Awkward Breeds just pushed things further, demonstrating a masterful approach to melody and a stylistic flexibility unseen on their previous works. Their latest offering, and first for Epitaph, Runners in the Nerved World doesn't break the trend, and contains some of their finest work to date.

As with Awkward Breeds, the sound of Runners in the Nerved World is deeply indebted to 1990â€˜s alternative rock, but working with producer Phil Ek (whose credits include all of the best Built To Spill albums) has undoubtedly pushed them even further in that direction. There is plenty of stylistic diversity, from the peppy beach-rock anthem â€œSummer Brings You Closer to Satanâ€, to the more meditative and droning â€œPet,â€ but almost all of the tracks would feel right at home on 90â€˜s college radio. Their contemporaries Joyce Manor and The Menzingers have mined similar territory with fantastic results but with The Sidekicks it feels even more natural.

There are more modern sounds present as well. It might be a simple case of shared influences, but a few of the songs on the latter half of Runners... sound A LOT like The Devil and God Are Raging Inside Me-era Brand New. The verses â€œSpinning Seatâ€ specifically finds Vocalist Steve Ciolek doing a perfect Jesse Lacey impression. â€œCentury Schoolbook Grown Upsâ€ also carries a heavy BN vibe. Coincidentally, these are two of the strongest tracks on the album.

Ciolekâ€˜s vocals have been the highlight of every release since Soggy Dog and here he continues his almost impossible streak of greatly improving with every release. His vocals have been described as â€œyelpyâ€ for almost their entire career, and while that term still applies at various intervals on Runners... his range has increased vastly, and heâ€™s never sounded more confident than he does here. Ben Bridgewell of Band of Horses (who have also worked with Ek) is another strong point of reference.

The Sidekicks have retained their position as one of the most exciting bands in the punk scene today, but it would be a bit of a stretch to describe most of the music on Runners in the Nerved World as â€œpunk rock.â€ This is a band that is constantly evolving, and they are just as interesting as an indie rock band as they were as group of scrappy young punks. Itâ€™s extremely early to call, but I wouldn't be surprised to see Runners in the Nerved World dominating year end lists come December.

Legendary Wings: Do You See