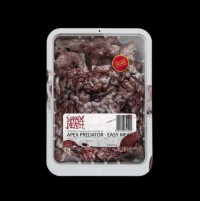 Itâ€™s difficult to review a new release from Napalm Death in the same way that itâ€™s hard to review a new release from Motorhead, Slayer or AC/DC. While they may try a few new things out here and there, you know what youâ€™re going to get going on, and you have a pretty good idea of whether youâ€™re going to like it or not. Apex Predator - Easy Meat, the latest release from the British grindcore pioneers, is no exception. While adding a few new flavors to keep things interesting, after three decades of melting faces, Napalm Death know what the people want and they deliver.

One of the albums sonic experiments comes in the form of the album-opening title track. After an awesomely cheesy spoken word intro, it devolves into a bleak mess of electronic noise punctuated by Barney Greenwayâ€™s trademark bellows. Itâ€™s closer to Swans than Cannibal Corpse and itâ€™s an interesting if unconventional way to kick things off. â€œSmash a Single Digitâ€ follows it up in more traditional Napalm Death style, but thereâ€™s a few melodic death metal licks in the second half that seem to channel At The Gates.

â€œDear Slum Landlordâ€ is perhaps the most interesting track on Apex Predator - Easy Meat, just because it is so different. While it is full of the crushing riffs and barked vocals that fans have come to know and love, instrumentally speaking it is perhaps the most melodic track that Napalm Death have ever committed to tape. It manages to feel epic despite clocking in at a mere two minutes.

The rest of the album is less surprising, but no less enjoyable. As stated before, Napalm Death arenâ€™t huge on deviation, but theyâ€™re even less into disappointment. Apex Predator - Easy Meat is just as great as all of their other late-period full-lengths. The absolutely disgusting cover art begs to be pored over in a physical format, and sums up the bloody musical carnage contained within perfectly. Apex Predator - Easy Meat arrives at a time of uncertainty in the Napalm Death camp, with longtime guitarist Mitch Harris taking an indefinite hiatus due to family illness, but it stands on its own as a fine piece of extreme metal. If youâ€™ve ever enjoyed Napalm Death, this album will just reaffirm that.