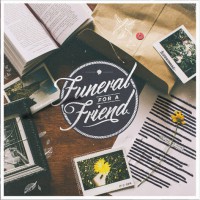 Some albums register on a level that stays with you for decades. For a lifetime, in fact. Casually Dressed And Deep In Conversation is one of those for me. I've touted it up here a lot at the 'Org and while the ensuing Funeral For A Friend records attempted to step out of its shadow, only Hours actually made a note. And it was still lagging behind by miles. Over the past few years, FFAF has been bouncing around trying to balance the rough grit on their earlier records/demos with the newer, more mainstream tunes they churned out as they ranted and raved about Welsh life, love and loss. When it comes to mixing the old with the new, Chapter and Verse tries its best but still just falls short -- leaving them with some ground to make up!

FFAF's always been led well by Matt Davies' clean and earnest vocals. This record isn't any different. He sounds just as he did in the early 2000s. However, trying to place all these sounds into one record really is the flaw that FFAF have tried and tried to avoid yet it's such an insurmountable hurdle. I think mixing so many sounds over the past few years and not sticking to some sort of uniformity may have hurt them as they kept winning niches over but losing some along the way kind of like Thursday. I loved all the experimentation they did and how they tinkered album by album and as fearless as this was, I really did need some consistency. A major plus though is how it doesn't feel like a concept album and instead is more aggressive than first anticipated.

"Stand by Me for the Millionth Time" comes off as a rambling thrash-jam and gives a great insight into how melodic and dissonant they went. Metal riffs, heavy-double kicking, jarring bass lines and a lot of old, rugged elements unfold. Feels like earlier iterations indeed. "Donny" is another classic example of this which throws back to tunes like "This Year's Most Open Heartbreak." However, there's still a disjoint in the overall feel of the album. "Modern Excuse of a Man" is influenced by '90s nu-metal and it's a tad disconnecting. Not bad but still, it takes a while to resonate and engage the listener. "You Should Be Ashamed of Yourself" is another belting tune -- angry and raging -- which continues to leave you wondering which album they're taking lead from. It feels like they're trying to cut loose and start fresh but it's so tough to not latch onto the older material. The band feels torn as to which direction they wanna go. The demo feel of the album is a huge positive I'll admit -- which manages to make the majority of songs work, such as the acoustic "Brother" which carries a lot of emotional baggage to it.

Lineup changes aside as well as the exit of producer Romesh Dodangoda weren't things I felt would take away the record's value and I don't believe they did. Chapter and Verse misses the mark in the sense that what it tries to achieve, Conduit already did in 2013. This album feels like a repetition of that and loses steam along the way. Nonetheless, there are quite a few jams that'll leave hardcore FFAF fans in raptures but some just fizzle before impact. Good record but nothing outstanding.