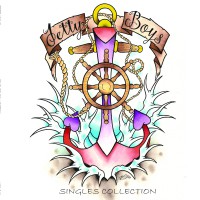 Sheboygan, WIâ€™s finest pop punk act Jetty Boys have been feeling nostalgic. The group released their impressive full-length, named after their beloved hometown, Sheboygan on vinyl for the first time last year. Then they compiled all of their songs from previous splits into one convenient package on Urban Pirate Records. To sweeten the deal they threw four unreleased songs into the thing. Itâ€™s a pop punk miracle!

The next two tracks are from their split with Boys Club where we take a more poppier turn. The bubblegum-esque â€œNo Goodâ€ is sure enough to get stuck in oneâ€™s head with the catchy chorus.

Up next is my personal favorite track on the record, â€œRope,â€ from their split with Direct Hit!. The vocals are perfect in their somber tone while the chorus sings the depressing line, â€œI hope that I never have enough rope to let you downâ€.

I have always felt that the vocals in Jetty Boys were very Dan Vapid-esque, so it only made sense that they released a split with Dan Vapid and the Cheats. â€œNot Even Closeâ€ feels like it could be an early Green Day song while their cover of The Roman Lineâ€™s â€œJimmyâ€ is executed so perfectly it feels as if they wrote it. In fact, The Roman Lineâ€™s Bod contributes guest vocals to the cover.

â€œStrangerâ€ is the last track on the compilation that was featured on a split. This one comes from their four-way split with Parasites, Braceface and Outrights. An angry, relatable song about how it seems that sometimes we would be better off if we had never met certain people. ("I liked you better when you were a stranger. I liked you better before we were friends.")

Four previously unreleased songs that could easily make their own 7-inch round out the collection. "Waiting Line" has the signature Jetty Boys feel but could stand to be a little shorter. "Dreams" is a poppy, upbeat, fun and adorably cheesy song while "Best Shot" has the classic pop-punk formula. "Crash In The Sun" closes out the album with Erik's bass playing standing out in a pleasant fashion.

This is one of those collections where nearly every song is enjoyable. It doesnâ€™t feel like the songs were clumsily thrown together and the sound quality is great. There isn't some weird, hard-to-listen-to B-side that you keep in your collection just because. Itâ€™s the perfect release for any Jetty Boys fan old or new let alone any fan of pop punk in general.

The Smith Street Band: Wipe That Shitâ€‹-â€‹Eating Grin Off Your Punchable Face [7-inch]