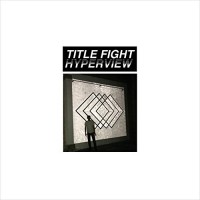 Hyperview is a pretty interesting and candid look into Title Fight's journey. It feels like their best written record to date but in terms of musical drive and edge, it just doesn't quite ring like the old days. It's not necessarily a bad thing, as bands press on, mature, evolve and experiment. Case in point, Pianos Become The Teeth. Ironically, Will Yip produced that album and here he is again, following up on Floral Green and helping build a shimmery, beautiful and melodically driven piece of Title Fight art. Now, does this musical shift really sink in as hard as PBTT's change? Not really. There's a loss of vibrance and energy in what I personally associated Title Fight with as per their past records and to sum this album up, well...I can best describe it as tame.

It's obliquely punk but not a big surprise. Looking back on Shed and Floral Green I saw this coming. A lot of their punk roots have been shed for spacier, atmospheric tracks. There's a strong shoegaze pull on songs like "Murder Your Memory" as well as the dream-pop jams like "Dizzy." Indie, melodic, distorted and dashed with reverb to cultivate a darker surrounding. I distinctly recall them saying this would be a heavier album but after taking it in, I can only assume they meant lyrically. Sure, the likes of "Chlorine" feel uninhibited, charming and jangly (and note, this sounds like it was done by Basement), but too many tracks collide to give this repetitive vibe. And they're not heavy at all!!!

Don't get me wrong -- there's a huge deal of turmoil, tension and apprehension to the tunes but how much of this do you really want the listener to absorb? At least fiddle around musically. Stuff feels too one-dimensional at times and Hyperview comes off like it's trying to force-feed introspection. Jump to "New Vision" which reflects the old days pretty well -- grittier and indie-punk -- and you wonder why wasn't more of this included. Same goes for "Rose of Sharon" which bassist Ned Russin gets to yell on, thankfully. Jamie Rhoden applies himself well on the mic throughout but it's the interplay with Ned that adds more layers to what made Title Fight resonate back in the day. The dynamic's lost and it really hurts.

Is it a bad record? Nope. Not by a long shot. But ultimately, it doesn't feel as differentiated as what the band did way back when, when their records stood out and urged you to pour sweat and tears into basement shows. Maybe the magic has been lost? Only time will tell but as of now, I can't say I'll be following their evolution with a keen eye. I guess I'm being harsh but I really expected more from Title Fight than a good album. Hopefully, a few more spins again and it'll hit harder...