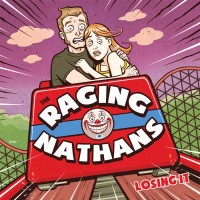 The Raging Nathans, a three-piece band out of Dayton, Ohio released their full length, Losing It in April 2014. It is a 13-track LP filled to the brim with super aggressive pop punk. There are definitely some gems on this album, but at the same time there are some filler songs.

One of the better songs on Losing It is â€œTooth Song.â€ This track is a really good and straightforward pop-punk jam that sums up the sound of the band. The song is fast and has a solid and consistent melody through out it. There is also a short guitar solo that stands out just enough from the rest of the song, but not so much so that itâ€™s the only memorable aspect of it. What definitely make this song interesting as well is the lyrics. The Raging Nathans start the song off with the fairly disturbing lines â€œIâ€™m losing teeth/ And in my sleep I spit mouthfuls of blood.â€

This album isnâ€™t terrible, nor is it amazing. The main issue with Losing It is that a lot of the songs donâ€™t musically differentiate themselves from one another well; that being said, songs like â€œTooth Song,â€ â€œHow To Validate Anything,â€ â€œIâ€™m on Drugsâ€ and a couple of others do redeem this record. But again, there is a noticeable amount of filler. If youâ€™re in the market for some new, underground pop punk then give this album a listen, but keep in mind that you will most likely be picking and choosing tracks rather than listening to the album all the way through.

You can check out this album here.