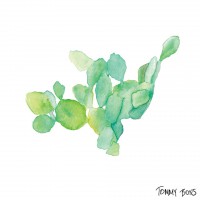 Tommy Boys, the is a new emo outfit from the East Bay. Their Self-Titled debut is in the in between of emo and pop punk, a place the band seems very comfortable lingering in. Reminiscent of American Football, You Blew It, and newer Transit, the band does an excellent job using their influences while remaining original throughout. The trio has a great group dynamic that demonstrates how in sync each member is with each other. The album generally fits into the genre, but the band adds their own spin to create intricately layered songs with a new touch.

The album begins upbeat with â€œCollege Radio,â€ kicking in with the familiarities of sweeping emo riffs. The song isnâ€™t the strongest on the record, but it makes for a good lead in to anticipate whatâ€™s to come. â€œCollege Radioâ€ has high energy that transition into â€œIn Jeans,â€ a song with plenty of emo vibes that temporarily slow down the record. Following up with a poppier song, â€œEstate Sale,â€ the song reminds me of the emo/pop punk era of the early 2000s as well as the Drive-Thru Record days. The bandâ€™s rhythm relies heavily on their quick sweping emo riffs, a technique that fits well into the bandâ€™s sound but can also be redundant when listening to the album all at once. While this seems to be part of the bandâ€™s signature style, they certainly have more to offer creativity wise as they continue to grow.

â€œ21 Rerunsâ€ does show a little more of what the band has to offer. The songâ€™s melody and vocals really showcases what the band is aiming towards with their sound. The song is fast yet still maintains rhythm and has plenty of variety. Serving as the longest on the record, â€œ21 Rerunsâ€ is possibly the most compositionally put together Tommy Boys' song.

One thing I love about this band is the ambiguity of the vocals. Not to say that theyâ€™re extremely unique and different, but I can think of a ton of vocalists, singer Robbie Donovan sounds like, but none that fully fit the mold of comparison. His voice is truly diverse with a wide range that fits the music as well as the despair of his lyrics. The closer, â€œSong 1â€ is an impressive composition that ends the album just as well as it begins. The first two minutes of the song is an instrumental piece that pushes further than others on the album. The riffs have more feeling and the vocals are just as emotional as the lyrics. The song is a perfect composition of the bandâ€™s dynamic songwriting and is an impressive way to end a full-length debut.

Tommy Boysâ€™ debut is solid, but can still use more diversity when it comes to riffs. The band ultimately have a great structure for melodies and the songs are impressive and catchy; reminiscent of old and new emo/pop punk bands alike.

The Vibrators: Punk Mania: Back To The Roots