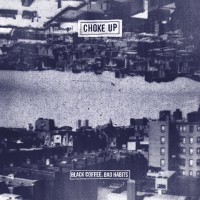 I'm already earmarking this as a contender for year-end lists.

Choke Up's catalog of emotional hardcore jams takes a turn for the better and comes in the shape of cracking, chaotic blasts of punk energy. They've cleverly evolved their sound and Black Coffee, Bad Habits has something for everyone, no matter what genre you're addicted to. It feels like the gates are coming down and you're turning any bits of frustration you're experiencing in life into relief. If I told you this is great record to vent to, well, I'd be selling it short.

Some friends name-dropped Desaparecidos. Some, Titus Andronicus. And others, State Faults. Myself? Well, it feels like a mash-up of Leer and Comadre. It's such a versatile 14-tracker that I really can't classify it. On top of a jarring lyrical narrative (which gets cheesy at times, yet still works) there's so much to draw from when tracks like "Wildflower" and "My Oh My" open up -- and with quite a bang at that! Angsty vocals, bass-heavy drivers and a damning sense of urgency brought on by the band's multi-vocal prowess all stab at you. The gang vocals are done so fucking well on top of some lush, dynamic and frenzied guitars. It's really commendable how Choke Up mix their screamo and punk styles to build on their solid musicianship.

"Crosses" and "Woke Up Drunk" then step things up a further notch as prime examples of punk bangers that leave you scratching your head...in a good way. There's a lot of quick-tempo indie-rock minced up here with a grating pace as well. "Don't Wake Up" in its rough melody feels strained but welcomed at that -- as if Pup and The Hotelier crafted something together. Such a connective tune. Even "Marcher," which is so fractured and all over the place adds another beautiful layer to the album. One of the biggest standouts though is "Woke Up Drunk" which starts out with a punk-banging attitude before a damn fine transition into a calmer, indie jam. The mid-tempo shift is so left field but once more, the band pulls out a curveball with a deft touch.

But if you think that that's all the cards they have up their sleeves, then you're fucking wrong. Really fucking wrong. Another dimension to Choke Up crops up when they dial things down to let you breathe a bit. Refer to the acoustic/folky "Polka Dot" which draws so much sentiment out with its violins and soft-spoken narrative. Same can be said for "Dry Out" -- an endearing and fitting anthem to an album with so much pouring out. It closes things out and leaves you pondering the unanswered questions in life but not before nudging you a bit to remember Alcoa (Defeater's Derek Archambault). That in itself is an epic compliment.

There's so much depth and personality to the album. Sure, it does come off as a track or two too long but still, it's got more than enough character to withstand this. The album never placates and it's music like this, incessant and never letting up, that's made for year-end lists. Black Coffee, Bad Habits is Choke Up's biggest statement of intent to date. Don't sleep on it.

Note: if they ever release a split with Banquets, someone please, call me a doctor. I'll be losing my shit.