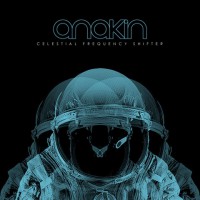 Anakin's always been an intriguing concept to me. Space-rock that blends grungy guitars with pretty eclectic synth patterns to top off some interesting story-writing. Simple and straightforward, they don't pride themselves on immediacy in their music or take stock in shifting things around too much. They're very much set in this electro-pop mode of storytelling and you know what...that's fine, and works pretty well for them. Think a less intricate Coheed and Cambria taking stock from influences like Hum. You know what you're getting into when you dive into Celestial Frequency Shifter, especially if you've taken in their older music. And yes, while it does seem one-dimensional, it's a style that few can wear so well. That said, definitely, it'd be nice to have them mix it up a bit more.

There's so much mainstream pull here that I'd love to see how the wider audience out there receives this. It's so commercially viable that if Nick Refn did a space flick, this'd be the soundtrack. Anakin's music is something you're tempted to say feels like a product (given how it's programmed and assembled) but you can't help but sense the art at play. It's crisp, clean and jammed with a drum machine effect that leaves you wondering if Marvel will one day pick it up for their Star Wars gigs (and yes, there are Star Wars references in the lyrics). I'll admit this band does bring out the geek and me with tracks like "Astro[not]" and "Satellite" drifting me off into what a Titan A.E. sequel could possibly look and sound like.

There aren't any guitar solos or wild shifts in tempo but what replaces those is a vast array of singalong melodies. The way the guitars sharply mesh with the synth-effect is smooth, weightless and soothing. I like how they seamlessly craft these bits and pieces. Now that doesn't say that they don't dirty things up. The sludgier "Cosmosapien" is testament to this, holding the rougher cards Anakin possess much more closer to the chest - which I admit I could have used more of. There's no big deviation from their set formula and that's where the cracks appear in the album. They seem to settle too much in the perception we all have of them - drowned out in a narrow, space-rock setting that's heavily influenced by its pop sensibility.

I guess it's the nature of Anakin and don't get me wrong, they're good at what they do best...but still, I've heard enough of them doing this schtick and I think it's right time we get something a bit more. A bit wilder and expansive. Something venturing into new territory - a journey into a frontier where Anakin have never gone before. I hope they take this leap soon because they could run the risk of sounding like a band short of ideas.