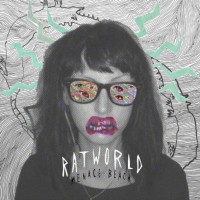 Slack rock bands have been making a comeback for a few years now. Itâ€™s cool to be 90â€™s again. Weâ€™re drowning in fuzz!

Menace Beach, for better or worse, is no exception to the rule and Ratworld feels like a well-calculated debut. These snotty Leeds punks arenâ€™t afraid to wear their influences on their sleeve. Sonic Youth grime bleeds throughout, but they are also able to make sure the songs are catchy and fun. Ratworld could easily fit among the early Superchunk records, and if they follow in the 90â€™s bandâ€™s footsteps, hope is on the horizon. The lyrics are great when you can make them out and the dual male/female vocals add to the emotional punch.

Producer and frequent collaborator MJ (Hookworms) clearly adds some of his own influences all over this thing. But the two bands arenâ€™t comparable. While Hookworms uses a similar effects for slower sludgier affairs, some of Menace Beachâ€™s songs could almost be classified surf rock. Almost. There are hooks galore, but here, you have to dig a little deeper to find them. Nothing proves it better than â€œTastes Like Medicine.â€ Easily the stand out track of many similar minded songs, it shows what Menace Beach can do when you scrape away the layers.

But Menace Beach wouldnâ€™t be the same band without their shoe-gazey sound, so itâ€™s a catch twenty-two. When they stray, it doesn't have the same effectiveness. However, like Wavves before them, the album suffers from lack of diversity. What Menace Beach do well they do very well, but it does start to wear. Luckily, the last third of the album is the most enjoyable and the hardest to forget.

Ratworld goes out with a bang and itâ€™s where this young band really shows promise.

Fucking Invincible: It'll Get Worse Before It Gets Better