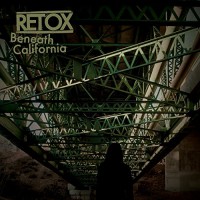 It's not easy to describe Retox to someone that isn't familiar with the band's bursts of noise and fury. Formed in 2011 by members of The Locust and Festival of Dead Deer, Retox pushes forward with the former's violent power (sans pod-people uniforms), creating a wall of sound that dares the listener to take even try and take a breath. Their third full-length release, Beneath California, continues along those same lines, producing a record with an aggression reminiscent of early Southern California hardcore.

With 12 songs clocking in at just over 20 minutes, the band is a study in intensity. There are no overwrought guitar solos, noodling musical interludes or any other kind of introduction. Once the clock starts ticking on any of the 12 tracks, the entire band is kicking into full gear, vocals almost as immediate as the other instruments. In fact, Justin Pearson's vocals are treated as a fourth instrument, and none of the players overshadow the others. Angry bursts of guitar and drums are punctuated by Pearson's distorted shouts throughout, but the listener never feels overwhelmed by the assault that Retox provides on Beneath California.

It is, of course, a noise record and anyone expecting fist-raising choruses or melodic sing-alongs will be sorely disappointed. While Beneath California may be its individual members' most â€œaccessibleâ€ work to date, it is by no means a record for the casual listener. The loud and sudden bursts of guitar and cutting screams of Retox are not going to be the soundtrack for your next BBQ. But for music fans that like their art on the more confrontational side, 22 minutes of Beneath California on your headphones will be time very well spent.