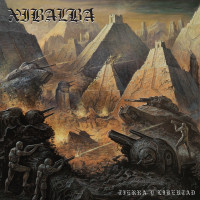 Xibalba declares war. They are ripping down all genre restrictions in their way, leading a full-fledged hardcore invasion into the 9th circle of death metal hell. Xibalba typically thrashes wildly about the lands of sludge, beatdown, and black metal, but by drawing such specific battle plans for Tierra Y Libertad, it becomes the band's best release to date, and I'm not just saying that because I am scared of them beating me up.

Releasing a growl of Cerberus' fury, and sending a front line of chugs and double bass, "Enemigo" quickly goes on the offensive. Squealing guitar solos explode between the static covered rhythms. Everything is moving so quickly and there is such little time to breathe during momentary beatdown riffs. It is this clash between hardcore and death metal that makes the LP feel frantic and unsettling, this tension remaining throughout the album, and the listener becomes torn between the sides finding peace, or continuing the war.

The album runs on the fuel of "Guerilla," where it is declared, quite vocally, "enough is enough," and nobody will bow to humanity's filth, offering a verbal barrage against racism, bigotry, and oppression. Xibalba also doesn't forget where they came from, musically, in this track, or others like "En Paz Descanse," where beatdown reigns supreme, warning the metallic opposition: one if by land, two if by sea, and three if by breakdown.

"Tierra Y Libertad" and "Si Dios Quiere" are back to back knockouts: an aerial dogfight with soaring, shrieking high notes; followed by a ground battle of grumbling guitars, speedy, rattling snares and cymbals, and incessant, inescapable, trench digging bass lines. They make one appreciate the previous reprieve in "Pausa" a little less, now realizing the brief, distorted, chopper-like progression was only air lifting the listener into a more dangerous environment.

There is resolution, however. "El Vacio," nearly 13 minutes long, serves as a slowly paced victory lap, trying to find its way through a stoner fog, as if Sleep and Napalm Death spawned a distorted hardcore creation wearing an Obituary shirt. A satisfying ending, seeing death metal slightly edging out hardcore, but both have made peace. The war is over.

Everything on Tierra Y Libertad is specific, leaving no doubt or ambiguity, just clear intent. When Xibalba wants to play metal, they play metal. If Xibalba decides to play hardcore, they play hardcore. There's no fanciful blending, no radicalization, every move is blunt and forceful, those raw emotions felt with every strum, pluck, shout, and kick, giving way to one of the most enjoyable, heavy sounding albums in a while.