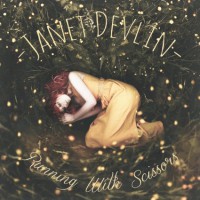 Running With Scissors is one of the most bland, boring pop albums of the decade so far, nauseating in it's sickly syrupy "vulnerability" and "preciousness". Janet Devlin was on The X-Factor, the most un-punk show of them all, and you can hear the processed and packaged emotions all over this record. She even turns a goddamn Cure song into a boring, cutesy folk-pop song just like the rest of her blended and diced output (though to be fair that's not too hard). It's the tweeness of Ingrid Michaelson, the self-absorption and the worst of Taylor Swift's image put into one woman who is so clearly a product, not an artist.

The songs aren't even that different from each other - the title "Creatures of the Night" promises some sort of gothic, badass Danzig homage but no! It's just backing vocals, a UKELELE, some rock instrumentation and the song title sung as it's just the bestest thing ever!!! You can't do that, damn it Janet (heh, Rocky Horror)! The rest of the album all pretty much follows that set pattern - vague break up songs, liberation songs, and "poetic" lyrics that aren't bad as much as are vague to work with any emotional situation for a tween, trophy wife, or the yuppies who will lap this up and would shrink in fear if they heard an Angry Samoans song.

And yet I can't even completely despise this album because it's just so lame - it's not the worst thing ever, and it's not proggy and endless/infuriating, it's just a manufactured artist making manufactured pop. That's all it is so just don't bother. Oddly enough she's supposed to be Kurt Cobain's cousin...but clearly his talent wasn't hereditary.