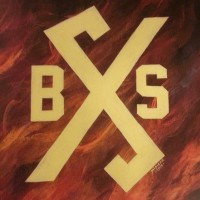 Bostonâ€™s early waves of hardcore saw the likes of Jerryâ€™s Kids, Gang Green, SSD, DYS and Slapshot. Aggressive, dirty and unified, the This is Boston, Not L.A. style of hardcore was distinctive on purpose. The raw, raspy vocals have been passed over as hardcore evolved, the bad attitude was lost, everything became a little less rough. When it seemed like the style would be lost, Boston Strangler found the extinguished torch and lit it with a Molotov cocktail, Fire ensued.

Boston Strangler deliver a riff-laden assault of rhythm guitars, spliced with short bursts of metallic guitar solos, and some essential whaling thrown in, often led with grimy, chugging baselines at the beginning of songs, and breaks of tremor-inducing drum fills. â€œJokeâ€™s On Youâ€ being a prime example of all these elements incorporated into a single track. Meanwhile, â€œForward To Hellâ€ and â€œOutcastâ€ show the bandâ€™s ability to switch up tempos on the fly, in a militarily commanding fashion.

Fire sounds like it could have been pulled out of a record store in the '80s or '90s. The lyrics, delivered by throaty, discontent vocals, echo not only those of an old Boston hardcore band, but also have a heavy street punk influence. â€œCall to Armsâ€ is reminiscent of The Bruisersâ€™ â€œTill the End,â€ with its guttural request for camaraderie, â€œAs friends, as brothers, show them where we stand, itâ€™s a call to arms,â€ repeated in chorus. Sentiments change throughout the album, taking on a biting, slightly sarcastic, Slapshot vibe in songs like â€œWe Donâ€™t Need,â€ where it is reiterated over and over, â€œwe donâ€™t need, we donâ€™t need, we donâ€™t need friends like you.â€ The contrast in tracks show Fire is seemingly fueled by the sounds of New Englandâ€™s entire historic punk scene, not just hardcore.

It is difficult to find an album that sounds so familiar to you before you even hear it, but Fire manages to do so. The Boston Strangler create a sense of nostalgia in the modern hardcore scene, and need to be celebrated for injecting youth into a style once in danger of flatlining.