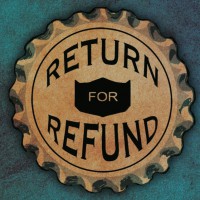 Toronto-based Return For Refund are one of those power trios -- a tight rock â€™n' roll three-piece churning out raw, heavy, riff-centric rock that, to put it plainly, doesnâ€™t fuck about. At times they sound like vintage Offspring; at others, like Government Mule or a less gloomy Nirvana, and vocalist Drew Clementinoâ€™s voice has a satisfying Southern grit to it that makes debut EP Return For Refund instantly recognisable.

Clementino also has a background in the military, which comes as no surprise when you hear the first five seconds of the record -- opening track â€œThe Fieldsâ€ wouldnâ€™t be out of place on a warzone montage. Lead guitarist Sasha Molotkow is a shredder and metalhead, while drummer Karlis Hawkins brings just a shade of funk to the rhythmic scaffolding of the band. Itâ€™s straightforward and no-nonsense, but itâ€™s not dumb.

â€œThe Fields,â€ with its shifting rhythms, driving chorus and soaring vocals is the clear highlight, but honourable mentions go to the offbeat, menacing head nodder â€œYoloâ€ and the jerky, syncopated, Chilis-esque â€œSome Is Better Than None.â€ This is evidently a group who know each other well, and prize musicianship and songwriting as highly as they do volume and intensity (which is more than can be said for many bands in this genre).

California X: Nights in the Dark