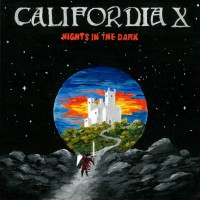 I canâ€™t speak for California X, but Iâ€™d have to imagine theyâ€™re sick of the Dinosaur Jr. comparisons. You get some guys from Western Mass playing hooky and fuzzed out guitar riffs and itâ€™s only natural to notice the influence. The two bands even share a sound engineer in Justin Pizzoferrato. However, to have it mentioned in every piece of press has got to be tiring. Well, thatâ€™s not going to stop here. To frontman Lemmy Gurtowsky, Iâ€™m sorry, but you play guitar like J. Mascis. I wouldnâ€™t be too upset by that though. Thatâ€™s like saying you play basketball like Larry Bird. Luckily, thereâ€™s a difference between being derivative and having influences, and fortunately California X falls into the latter.

With their sophomore album Nights in the Dark, the former trio, now quartet, donâ€™t really shake things up too much from their solid debut, they just do it better. The riffs are heavier, the hooks are catchier and the vocals are stronger. Guitar shredding aside, Gurtowsky certainly doesnâ€™t sing like Mascis. To compare to another '80s SST band, heâ€™s much more Bob Mould.

The first half of the Nights in the Dark features the sludgy â€œHadley, MA,â€ the acoustic finger picking on instrumental â€œAylaâ€™s Song,â€ and the ridiculously catchy chorus on Mars tribute and album highlight â€œRed Planet.â€ The formula changes a bit for the second half, which features two, two-part songs that are bridged together by a quick interlude. Each of these super-sized songs (â€œBlackrazorâ€ and â€œSummer Wallâ€) feature a sludgy/shoegazy part one followed by a shit-kicking power-pop style part two. Overall, this proves to be an excellent formula in breaking up the album that prevents it from sound like one long (albeit fantastic) song.

Releasing this album when itâ€™s currently zero degrees in Massachusetts seems like an odd choice seeing how I just really want to blast these songs as loud as possible while spending time outdoors. That being said, the first few weeks of January are an absolute dearth for new music, so to have such a great album be released this early in the year is a real treat. Stay warm with these songs now and know theyâ€™ll be ready for your car stereo come spring.

Stick To Your Guns: Disobedient