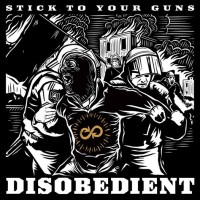 Stick To Your Guns

Metalcore has never been a genre quick to accept innovations and new ideas with much fanfare. From the genres mid-00's heyday when bands were copping At The Gates riffs like they were going out of style and seemingly endless deathcore bands were popping up out of nowhere, it looked like the scene was forever to be stuck in a rut of stagnation. In the past few years however, a new breed of bands have seemingly popped up out of nowhere, taking the breakdowns and heaviness of metalcore and combining it with the uplifting lyrical themes and overall style of modern hardcore. Stick To Your Guns are one of the more prominent bands in this sub-scene, which includes fellow tourmates such as The Ghost Inside and Counterparts, with their metal-tinged hardcore earning them great success across the United States. Their latest release Disobedient furthers their sound, while still keeping the same hardcore trappings that gained them prominence

Stick To Your Guns' earlier albums Diamond and The Hope Division demonstrated a keen ear for melody, while also containing enough mosh-worthy breakdowns and hardcore riffs to to make you want to throw down as if your life depended on it. Vocalist Jessie Barnett has a great range and can growl and scream with the best of them, however he relies way too much on processing his vocals to the nth degree. This is a shame, since earlier tracks such as "We Still Believe" off Diamond showed Barnett delivering hardcore diatribes without over-relying on studio production to get his point across. There's nothing wrong with using studio techniques to enhance your performance, but when it gets to the point where it overshadows your natural range, that's when you should put away the autotune for a minute there.

"What Choice Did You Give Us" features a sludgy main riff, mixed in with gang vocals and Barnett's mixture of hardcore growling and clean vocals. The clean parts stick out like a sore thumb and feel shoehorned in, detracting from the surprisingly brutal feel of the song. "The Crown" contains enough minor key twinkling and smooth vocals to provide an alternative crossover for the band. However, as soon as it launches into the chugging chorus riff you know Stick To Your Guns are playing to their strengths here. "I Choose Nothing" a collaboration with Terror frontman Scott Vogel, is the album's standout. While the sampled speech from Charlie Chaplin's The Great Dictator might be one of the cheesiest hardcore cliches in human history, "I Choose Nothing" see's Stick To Your Guns doing exactly what their name suggests and just delivering straightforward, no frills hardcore with all the intensity you'd expect from a track that features backing vocals from the guy behind Keepers Of The Faith.

There's something endearingly enjoyable about Stick To Your Gun's earnestness. The most entertaining factor about the album would easily be the band's uplifting approach to hardcore. As a band, their approach to hardcore is reminiscent of groups like Have Heart or Defeater, in that they eschew the full-on tough guy approach for a more human and emotional side, without resorting to straight edge cliches. Disobedient is a worthy follow-up to Stick To Your Guns earlier work, even if the processed vocals can grate on you at times. If anything else it should at least provide you with a solid soundtrack to practice your throwing down and two-step skills.

California X: Nights in the Dark