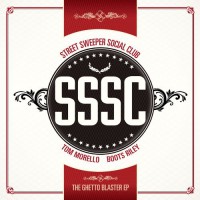 The term â€œrap-rockâ€ typically makes any conscious music fan cringe because it makes them remember a time when Limp Bizkit was toping the music charts and constantly being played on the radio. 1999 was definitely a weird and backwards year for mainstream music. Limp Bizkitâ€™s ridiculously stupid video for â€œBreak Stuffâ€ stole the Video Music Award for best rock video from Rage Against the Machineâ€™s video for â€œSleep Now in the Fireâ€ that year. Thatâ€™s how moronic mainstream music was at the turn of the century (Iâ€™m sure many of you can name other instances of musical idiocy from back then, comment below!).

Rap-rock isnâ€™t all that bad. Rage Against the Machine, to me, has always been awesome. Seeing them in 2011 is still the best show I have ever been to. But when RATMâ€™s guitarist Tom Morello and The Coupâ€™s Boot Riley teamed up in 2009 to form Street Sweeper Social Club, a super group that combines hip hop, punk rock, and funk, it was like the planets aligned and all that garbage from 1999 was gone.

Street Sweeper Social Club released their debut, self-titled full-length in 2009 and then they released The Ghetto Blaster EP in 2010. This seven-track EP features three new songs, three covers, and one amazing remix of a song from the bandâ€™s previous release.

Of the three new songs on this EP, â€œThe New Fuck Youâ€ is the one that stands out the most. It has a distorted and super funky main guitar riff that this played through out the song. The hook in the pre-chorus where Boots and the back-up vocalists sing â€œFuckinâ€™ is the new â€˜Hey, how do yâ€™do?â€™/ And revolution is the new fuck youâ€ instantly gets stuck in your head. About two-thirds of the way into this song, the band goes into a build-up until it peaks and leads into Tom Morelloâ€™s piercing and robot-like guitar solo.

Street Sweeper Social Club chose three interesting songs to cover for this EP. They covered The Coupâ€™s â€œEverythang,â€ â€œMama Said Knock You Outâ€ by LL Cool J, and â€œPaper Planesâ€ by M.I.A. All three have been reinvented so that all of the beats sound effects so that the bandâ€™s instruments mimic them instead of adding them in later.

The best of the three covers is â€œPaper Planes.â€ SSSC really did a great job making this song their own while not straying too far away from the original. Boots Riley masterfully hits every rhyme and Tom Morello is able to mimic the gun shot and cash register sound effects very creatively all with his guitar. To get that cash register â€œchimeâ€ I believe he slides is finger up the low E string on his guitar and then quickly strums all of the strings up on the headstock of his Fender Telecaster. And just when you think heâ€™s about to go into a solo, he kind of fakes you out and plays an octave-filled interlude insteads.

The song â€œPromenadeâ€ was arguably the best song that appeared Street Sweeperâ€™s debut album. To me, itâ€™s their best song period. But when I heard the remix of Promenade that they put on this EP for the first time, I was stunned. I didnâ€™t think this song could get any better until I heard â€œPromenade (Guitar Fury Remix).â€ For those of you who donâ€™t know the song, â€œPromenadeâ€ has a beat and a bassline that are both so funky that theyâ€™ll get you to dance all while having a super-rockinâ€™ guitar chord progression. This song also has politically savvy lyrics like â€œTwo by Two/ Promenade/ Duck from a B1 bomber raid/ Ainâ€™t bout the plans Osama made/ Banks get paid off petrol trade.â€

What makes the â€œGuitar Fury Remixâ€ version different from the original is that though Tom Morello shreds with one guitar solo, and then he added another that will blow your mind. If you have followed his career, you will agree that this is the ultimate Morello-ian guitar solo. It echoes, it shrieks, itâ€™s insanely fast, it has his signature â€œDJ scratchesâ€ and more. It sounds like it could be in a sound track to some space traveling movie or television show.

So far this is the latest material from Street Sweeper Social Club, which is too bad because the two releases they have under their belt rock and from what I have seen online, their live show looks like a ton of fun. SSSC is clearly a collaboration where both Boots and Tom were able to bring out the best in each otherâ€™s talents by truly respecting the partnership. Boots is great at busting out the rhymes, while Tom shreds on guitar. Hopefully theyâ€™ll bring the club back into full force sometime soon.