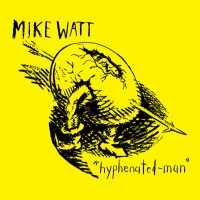 Without a doubt, one of the most tragic and painful losses on a musical level and for many who knew him, was the loss of D. Boon. His friends and fans were robbed of his genius and when listening to the Minutemen or watching their videos, you can't help but figure he was a really nice and genuine individual. In fact, both George Hurley and Mike Watt are pretty much the same and eventually you have to move forward and not dwell on the past. Mike Watt's recording career is well documented and since first releasing his solo material upon fIREHOSE's demise, you have to give him a lot of credit for continuing to make new music and new sounds while tipping his hat to his past.

Hyphenated-man is a Mike Watt masterpiece from start to finish and he's joined by two formidable accomplices who are no strangers to the world of underground music. Guitarist Tom Watson (Missingmen, Red Krayola, Slovenly) and drummer Raul Morales (Missingmen, Killer Dreamer, F.Y.P.) have appeared with Watt before and by now have gotten into a rhythm to where the songs seem to flow from one to the next. The 30 songs (yes 30!) on hyphenated-man are fun to listen to and with the longest clocking in at just over 2 minutes, you know you're in for one helluva music ride. Watt, Watson and Morales cover every base you'd expect from someone with Watt's musical history and an album you can go back and listen to repeatedly and get more out of it each time. Watt has always embraced varied musical influences and they're very evident on hyphenated-man and thankfully so. The songs are quick bursts with a lot of substance to them.

One major issue that could be a problem with an album of this length or any album over 12 songs, is the sequencing. This is where hyphenated-man succeeds and is above and beyond your standard double or even triple album. The production is crisp without sounding too technical as you want the musician's playing to shine rather than sounding slick. ony Maimone did a killer job recording and mixing with Watt handling production duties. Hands down this is one of the best albums in Watt's extensive discography and in all honesty, it could've been right at home on SST Records as a solo follow-up to Double Nickels. Bonus points aren't even needed for the Raymond Petition artwork.