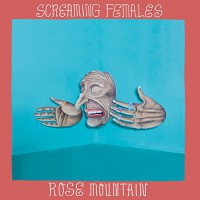 At least from my perspective, Screaming Femalesâ€™ strength has also been their greatest hindrance. The fact is, the band is a trio of maestros: lyrics that when removed form the music can rumble with the best of the best poetry, zipping guitar lines that are precise as they are frantic, bass and drums that lock together as though Butler and Ward had snuck into the studio. But, because the band has such talent and creativity zapping from their fingers at all times, itâ€™s almost too much for a knucklehead like myself to take in. Most people can only focus on one Dali at a time -- give us a Dali next to Rembrandt next to a Picasso and, well, itâ€™s all just a bunch of paint.

Thatâ€™s why Rose Mountain seems to be the result of a specific focus. While the band used to have a million ideas slashing about at once, here, they focus on single thread, coagulate, and take that theme to its fullest potential. â€œRipeâ€ opens with the bandâ€™s most ripping riffage to date. Itâ€™s no surprise that itâ€™s so powerful because the band seems to working in complete union. They always had chemistry, but now, they seem to have applied expertise to their works. So, when vocalist Marissa Paternoster sings about setting horses free, Mike Abbateâ€™s bass and Jarrett Doughertyâ€™s drums feel like horses galloping.

It doesnâ€™t hurt that this is also a collection of the bandâ€™s best songs to date. Frankly, â€œWishing Wellâ€ is phenomenal. The tune follows the great blues-rock tradition as carried by Janis Joplin, Alice Bag and Shirley Manson. Thatâ€™s not to say that it sounds like â€œclassic rock,â€ but just as tunes by those legends gain power from a rising and falling action, a slight twist of enunciation and intensity, â€œWishing Wellâ€ is a tune that shakes the soul. There is as much said here in texture as there are lyrics. And, like those legendary artists, itâ€™s hard to actually pin the song down. Paternosterâ€™s tone never seems to be direct -- is she lonesome? Is she angry? Is she distanced? I donâ€™t know and thatâ€™s where the tuneâ€™s genius lies. The â€œsimplicityâ€ herein allows for projection, so that no matter what emotion is generated by the wave-like progression, itâ€™s a gut punch.

Wisely, the album isnâ€™t strictly a â€œfeeling fest,â€ though. Producer Matt Bayles (he-who-worked-with Mastodon, The Swordâ€¦ and Queensryche?) and the band pay homage to the sheer power and beautiful of the riff. The title trackâ€™s opening rumble could go toe-to-toe with any Matt Pike creation (and yet, in the song, the band is daring enough to chop out the riff and snap in a sort of twisted, ghostly keyboard. Spooky!) The very sound of the song underscores the releaseâ€™s gambit.

There is a clean, precise vision here resulting in powerful simplicity. No doubt, itâ€™s a masterâ€™s task to mix together dozens of fragments and threads and have them work in a mobile-like conjunction. But, Iâ€™d argue itâ€™s even more difficult to find the simple, striking movement that says all in a few words or notes. Give anyone enough paper and ink and eventually theyâ€™ll get to some sort of truth. But who can speak a fundamental truth in 12 words or a single power-chord? Screaming Females just learned how.