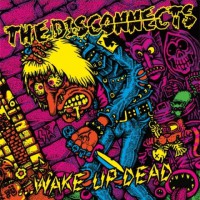 The Disconnects LP has been a long time coming. When the band released their debut â€¦Are Healthy tape waaaay back in 2011, they kicked out six or so tunes that saluted classic t0â€™s New York and Detroit punk. But, following that, they intermittently released a split release here or there, but never answered the question as to whether they could rock a whole album. Itâ€™s easy (well sorta) to write one or two kickers in a row- a snappy riff here tacked to an edgy lyric there- but it takes a true craftsman to sustain that energy for a whole release.

Well, you know what? Wake Up Dead proves the wait was worth it. It seems the band gestated these songs for just enough time to make them as swinging as their potential suggested, without losing their nihilistic energy. The title track alone proves this. Propelled by a slamming, Ron Asheton inspired riff, the band sings about serial killers and death and â€œIâ€™m gonna destroy everything you knowâ€ before ripping apart into a cacophonic mess, only, in the classic 70â€™s rocks style, bring it back together for a kicking finale.

And as was suggested by previously releases, the band capitalizes on the â€œpunk ballad,â€ and really, they are one of the few bands doing so today. With a slight nod to the tough-guy-with-a-heart brutishness of Sonny Vincent, the band bends out muscular love tunes that are as masculine as they are vulnerable. Thatâ€™s really no easy feet and the fact that the band spins the tales with such effortlessness makes one wonder if they arenâ€™t saluting the classic era of doo-wop-rock as much as living it.

Though, there is some meta-awareness here. â€œMakes me wanna killâ€ is one of the bandâ€™s most clever numbers, along with its partner â€œSick sick sick.â€ After a short nod to Black Flag in the opening bars, the band kicks out one of the phenomenal â€œI hate myself and want to dieâ€ 90 second punk bangers heard all across Nervous Breakdown, and the DangerHouse discography. Most impressively, in the minute and half run time, the band both salutes the first wave punkers, as well as explain that those wild guys were very much inspired by the wild guys from Detroit a few years prior. Well done!

Wake Up Dead is a love letter to the earliest waves of punk as well as the Detroit and NY proto-punk that came before it. But, the album succeeds in that it doesnâ€™t revel in these influences. Rather, the band name checks the original heroes to show pedigree, and then just bangs out music as wild and as hard as they can, without worrying about being clever or respectful or even accurate. The result is a rarefied album in the year 2015: a straight-up rock album thatâ€™s as fresh as it is manic.