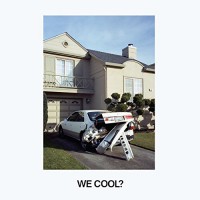 Thereâ€™s no question that Jeff Rosenstock is one of the hardest working and most dedicated musicians in the scene today. You can really hear that he puts in his absolute best effort whether it was Bomb The Music Industry!, Antarctigo Vespucci or one of his other projects.

On top of being signed to a prominent indie-major label, this album is under his name, and this combination means that the stakes are quite a bit higher for him. In We Cool? he seems to be at a crossroads between the fun and energetic sound he had in BTMI! (and that he has now in Antarctigo Vespucci) and taking his music to a deeper, more serious and self reflective level. We Cool? is a balance between both of these realms in its sound and lyrical content.

A perfect illustration of this balance is the song â€œGet Old Forever.â€ In this song (and others on this album) Rosenstock seems to be questioning whether it might be time to be acting more mature by comparing himself to others in lyrics like, â€œWhen your friends are buying starter homes with their accomplishments / Drinking at a house show can feel childish and embarrassing.â€ Even the first full minute of this track is pretty gloomy for a Jeff Rosenstock song. It does a great job of starting off the album on a somber and reflective note to show that this is not a typical high-energy Jeff Rosenstock project. But a blaring, distorted guitar, loud vocals from Jeff and his back up singers, and a short, buzzing synthesizer fill quickly interrupts this melancholy part, which shows that this album is not all about serious introspection, but it is also about embracing and enjoying life: â€œBreathe in deep and debride your life/ Stale regrets are a waste of time.â€

Aside from having an awesome music video, the balance Jeff is maintaining on this album is also very apparent in the piano-centric song â€œNausea.â€ There are the less mature lyrics like, â€œHeld in a bong hit, sitting in a hot tub in South Wisconsin / I feel amazing when Iâ€™m all alone / Switching between porn and Robocop.â€ Then there are the more truthful and profound lyrics in the chorus that go, â€œI got so tired of discussing my future / Iâ€™ve started avoiding the people I love.â€ Those lyrics donâ€™t only show us another side of Jeff, but they are also so incredibly relatable. How many of us truly know what we are going to be doing for the rest of our lives and hoping that our family will be accepting of it? These are the lyrics that are going to be sung by everyone in the audience when it is played live. The best way to describe â€œNauseaâ€ is that itâ€™s an â€œunderdogâ€™s anthem.â€ It even has a bit of an anthemic vibe to it between the harsh beat of the drums, the confrontational sound in Jeffâ€™s voice and the soft guitar strums that are played during the chorus.

We Cool? doesnâ€™t really have one set sound to it. It bounces around from garage rock, to folk punk to power pop, etc. All of the 12 songs on this album sound so different individually, yet they go together perfectly to make up this album.

For those of you who are just beginning to get into Jeffâ€™s music, I wouldnâ€™t recommend starting off with this album. Itâ€™s not a great introductory piece, but it is a great additional piece. Listen to his earlier work and the come back to this release. For those of you who know his earlier material, you will be quite happy with it. He wears his heart on his sleeve through out it making it a very honest album. We Cool? is an unique release and it will be considered a milestone within his discography. It is a major accomplishment.

The Disconnects: ...Wake Up Dead