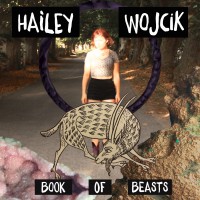 Hailey Wojcikâ€™s newest EP, Book of Beasts, is her first solo release since Diorama in 2010, though sheâ€™s released an EP and a full-length album (self-titled and Wise Blood, respectively) with her two-piece rock outfit, WOJCIK, in the between time. Book of Beasts was engineered and produced by Hailey herself, making it a true solo EP. The EP is consistent with her notable, dark, witty and fierce style -- think, maybe, a darker version of Kate Nash, for reference.

The majority of the EP is upbeat, with the exception of the final track, "East Coast," which slows things down a bit. It gets a strong start with its lead off track, "XO, Skeleton," the single off the EP, with its own video, put together by Wojcik herself, featuring bugs and home videos. The song is extremely catchy, with a bouncy tempo to contrast the darker lyrics of the song. The song has a bridge about finding a moth as a child, and crushing it into "a sickening powder," for example. Itâ€™s the exact sort of song you want to lead off an album: it pulls you in and lodges itself in your head. Itâ€™s an attention grabber for sure.

Book of Beasts continues in such a style with the following tracks, "Dog V Man," "Cigarette" and "Prosimian." It showcases Wojcikâ€™s strong, melodic voice and witty lyrics, all with infectious and vigorous tempos. If you want a highlight on vocals with a shift between tempos, "Cigarette" is your song; and if itâ€™s a move from slow to fast, clapping and a focus on lyrics, "Prosimian" is the way to go.

The five-song EP rounds off with â€œEast Coast,â€ clocking in at nearly five minutes, slowing things down to bring Book of Beasts to a suiting end. The song is one of the EPâ€™s highlights, with distinctive drum beats, lower vocals and matching chord progression. Once again, there is no holding back of vocals; the song clearly demonstrates Wojcikâ€™s range.

Book of Beasts proves, once again, that Hailey Wojcik is deserving of her nickname -- â€œthe Wednesday Adams of her genre.â€ The EP is undeniably fierce, dark, witty and catchy. And it's certainly full of beasts, too, from moths to dogs, it doesn't disappoint. Objectively, itâ€™s a very solid EP, with memorable guitar riffs, strong vocals, clever lyrics and choruses you can sing along with. Subjectively, itâ€™s an EP thatâ€™s going to be incorporated into the music I listen to more frequently.