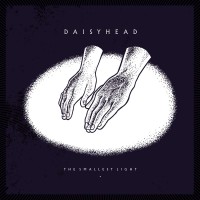 Nashville, Tennessee's Daisyhead at first glance appear to be relative newcomers to the alt-rock/emo/post-hardcore scene, forming in 2012 and then putting out their 2013 EP I Couldn't Face You a bit quietly. Shame because it really showed a lot of quality. As they shaped their debut LP, they took time to drop a split with Have Mercy, which for me is what definitely made me stand up and take note of their direction. Simultaneously heavy and harmonised, Daisyhead's penchant for blindsiding you with collisions of guitars throw back a lot to bands like Balance and Composure, Superheaven (formerly Daylight) and Citizen. And what's needed to set them apart from this crew? Well, The Smallest Light accomplishes just that as it achieves a sound that while it draws parallels to the aforementioned bands, feels much more aggressive and guitar-driven, giving Daisyhead just that extra bit of character.

Said character does well to distinguish them from their peers and contemporaries. Dulled rhythms, plucky riffs and a smooth manner of contrast/transition from slower to more upbeat territory help build their arsenal. All via magnetic and captivating melodies as Daisyhead reveal more of themselves. The perfect touch to show these points pop up on "Defenselessness" - which is a great balance between the smooth, polished sounds of the band and the grittier, rougher dynamic they shine even more in. Swelling up with melodic octaves into near-standstills at certain bridges and intervals, I must say there's a lot to take in musically. Overwhelming at times. The harsher vocals of Zach Chiarizzio (bass) and guitarist Michael Roe stand out more as opposed to the cleaner elements of the band, which come off a tad disengaging at times, but if you can remember their Jimmy Eat World "Work" cover from last year, you could definitely relate to me when I say, their dirty tones are their best.

'I knew you'd come back around / Eventually / But right now I just don't have the time / To waste' emotionally floods you on "Lacking Basis" which again highlights how well they do the slow to fast musical step-ups. Another great example of this? "The Halt" which kicks off with shimmering guitars and a soothing melodic lull that draws you in before exploding out the gates. Crashing instrumental that bursts into life like a Thursday demo. The self-titled track is another shiner which I must say feels a bit like Foo Fighters' "My Hero" on the heavier sections. Not sure if this was unintentional. But again, it's Daisyhead's slick, versatile guitarwork (and at times, their shoegaze-y feel) which really shake the album up. They allow each track to feel great on its own and more so, allow them all to unite as an even stronger collective.

To call this a strong debut would indeed be an understatement. Some songs feel daunted. Thick with tension and centres on stories that have been shaped from lives being upended. The lyrical content hints at such and again as a poetry and graphic novel freak, I would have it no other way. The bandâ€™s sound takes listeners back to '90s post-hardcore/alternative rock but Daisyhead does well to inject their own unique edge and overall, a driving signature style. As promising as they've been, they've had minor flaws, which do crop up here as well. I think one or two tracks could have been cut, and some even shortened. But as you ingest the reverb-laden guitars, huge grungey riffs and neverending soft/loud dynamics, it's not hard to spot why the emotional vocals and messages are carried on through each song so powerfully. The end doesn't flow as well as the opening and mid-sections of The Smallest Light but it'd be a tad harsh to call the record front-loaded. All in all, sit down and let this album soak in. It's one that'll shock you into life.

Think I'm playing? Take in the angry riffage on "Lost Her". That title says it all.