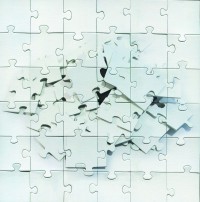 Not Scientists are from France, formed of members of Uncommenmenfrommars and No Guts No Glory who are both well-known and great bands. They've only been together for around a year but have already played 99 shows in the last 12 months. Now, Destroy to Rebuild is their ambitious debut record.

The album kicks off with the minimal "Window" which combines some pounding drums and melodic guitar tones, before the echoed vocals come in. From this track, you'd be more likely to expect something like Hot Water Music or Red City Radio to follow, but second track "I'm Brain Washing You" is pure pop-punk gold. The press release states Buzzcocks are one of their main influences, and this song is where it comes through most.

The album carries on covering tons of ground as it progresses, with the rocky-yet-subdued "Broken Pieces" standing out, as does the Title-Fight sounding "These Heads Have No Faces" and the penultimate track, "Wait," which incorporates ska upstrokes.

Overall, this is a great debut record. You'd expect this sort of record from a band's third or fourth album and for it to alienate half of their fanbase, but as a debut, it just works. They've got a lot to build on, but it's weird, and surprisingly dark; a good listen from a new band with a lot of potential.

A Place to Bury Strangers: Transfixiation

Oldfriends: Itâ€™s Not Working Out [7-inch]