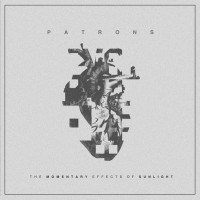 Patrons are a post-hardcore band from the South West of England. They're heavily influenced by bands like Thrice, La Dispute and This Will Destroy You. Based on DIY ethos and inclusivity, the band gained traction for their prior release, a self-titled EP released in March 2014, and have now followed it up with four-track EP, The Momentary Effects of Sunlight.

The EP kicks off with the slow-burner â€œLost Ageâ€, which starts out with twinkly guitar and soft vocals, before erupting into a full band explosion a minute or two in. Itâ€™s a good indication of whatâ€™s to come. The Thrice influence stands out, perhaps the most, with the dark guitar melodies in the background and the vocals at times sounding like Vheissu-era Dustin Kensrue.

â€œCircusâ€ moves along at a slightly faster pace and builds on the technical influence with time signature changes and noodly guitar parts. Itâ€™s a good track which shows the best of what the band have to offer, incorporating all of their hallmarks.

The final two tracks close out the EP with more of what weâ€™ve seen before. Itâ€™s good, they have a lot of potential; a lot of this sort of post-hardcore can fall flat, but this manages to impress. The 7-minute â€œBloody Symmetryâ€ shows the most potential for the band with its massive outro. The production on the EP could be better and could be used to really highlight some of the subtleties to make sure they donâ€™t get lost in the mix, but on the whole itâ€™s a great effort from a band who are building and building